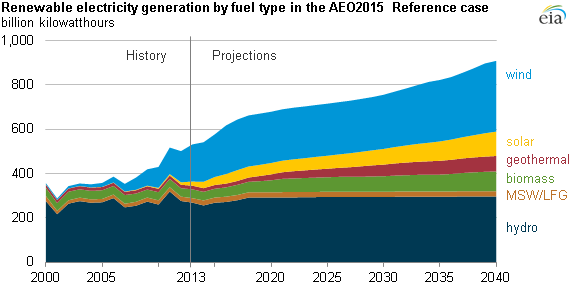 The U.S. Energy Information Agency (EIA) projects that electricity consumption will increase at an average annual rate of 0.8% from 2013 to 2040, nearly in line with expected population growth. Continuing a recent trend toward lower levels of carbon-intensive generation, natural gas and renewable generation meet almost all of the increase.

According to the EIA's Annual Energy Outlook 2015 (AEO2015) report, electricity generation from renewable sources provided 13% of U.S. electricity in 2013. In the AEO2015 reference case, this percentage is projected to increase to 18% by 2040.