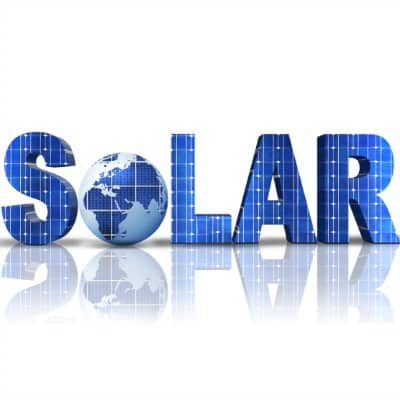 Global capital spending by producers of photovoltaic modules, cells, ingots, wafers and polysilicon is expected to rise by 30% in 2014 to reach $3 billion. So says a new report by IHS. This will mark the first time that expenditures have increased since 2011, when they grew 8%.

Capital spending on manufacturing equipment and facilities used to produce PV raw materials or products has fallen in recent years because of massive overcapacity and oversupply, which have sent prices down throughout the supply chain. However, the IHS report says a sustained increase in capacity from emerging economies is set to spur the 2014 recovery.

IHS says the projected growth will bring to an end a two-year period when spending dropped significantly – by 72% in 2012, and by an anticipated 36% this year. During this period, PV industry capital spending will plunge by a total of $10.6 billion, the report says, falling to $2.3 billion in 2013, down from $12.9 billion in 2011. See the following chart: 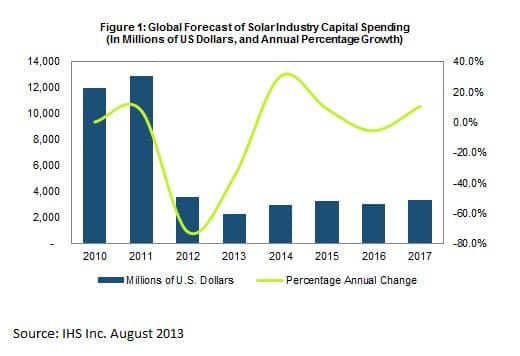 ‘South America, Africa and the Middle East now are leading the world in solar capacity additions – and they also are leading the capital expenditure segment of the PV business out of its slump,’ says Jon Campos, solar analyst at IHS. ‘The overcapacity in PV production mainly has been concentrated in the developed solar regions of the United States, European Union and China. But as demand expands in new areas, PV manufacturers are gaining interest in producing their wares in these regions, resulting in new factory openings and boosting local capital spending.’ 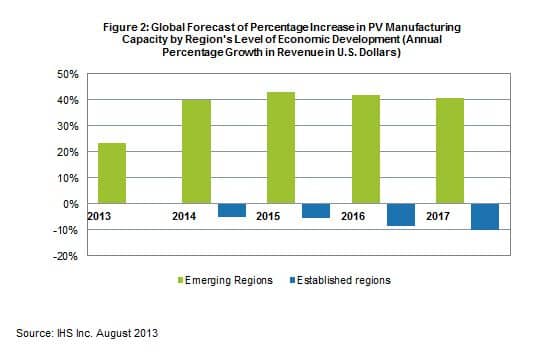 The report says emerging markets account for 7.9 GW of the world's total announced capacity for PV materials and products from ingots through modules, with the potential to climb to nearly 11 GW by 2017. Among all the emerging economies, the largest percentage increase in capacity is occurring in South America, Africa and the Middle East, IHS says.

Beyond the rise in demand from emerging countries, other factors are contributing to the recovery in capital spending. PV suppliers are engaging in new technology upgrades in order to enable higher efficiency and lower dollar-per-watt production costs. Equipment is also critical in allowing PV manufacturers to differentiate their products.

‘Our research is showing a return to market equilibrium with regard to supply and demand,’ Campos says. ‘Overcapacity seems to be correcting itself, and from the last few financial announcements, a handful of solar companies have returned to profitability and widened margins. The last piece of the recovery puzzle is capital spending and investment in high-efficiency technology.’