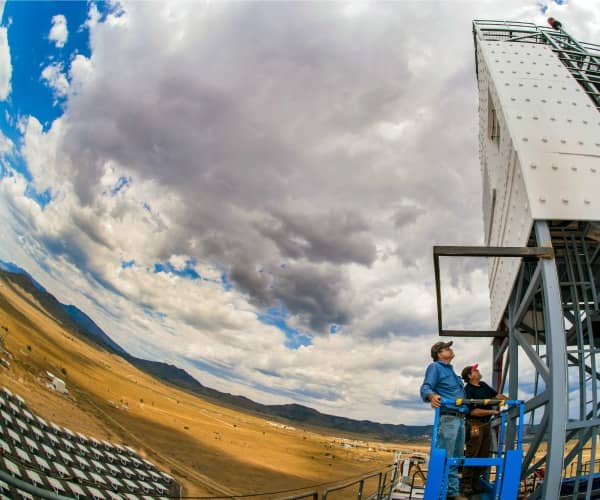 Engineers at Sandia National Laboratory in New Mexico have installed a continuously recirculating falling particle receiver at the National Solar Thermal Test Facility to test a new method for capturing and storing energy in concentrating solar power (CSP) systems as an alternative to molten salt.

The falling particle receiver works by dropping sand-like ceramic particles through a beam of concentrated sunlight, capturing and storing the heated particles in an insulated tank. Sandia says the technology can capture and store heat at high temperatures without breaking down, unlike conventional molten salt systems.

The testing at the solar tower will occur in two phases. First, researchers will test an insert designed by Georgia Tech that slows falling particles inside the receiver like a Pachinko board to increase the temperatures of the particles as they fall through. Later this summer, Sandia engineers will remove the Georgia Tech insert from the receiver and evaluate free-falling curtain configurations.

Cliff Ho, the project's principal investigator, says the goal of the testing is to develop a prototype, cost-competitive falling particle receiver that demonstrates the potential for thermal efficiency greater than 90% while achieving particle temperatures of at least 700 degrees C.

‘This technology will enable higher temperatures and higher-efficiency power cycles that will bring down the cost of electricity produced from CSP,’ Ho says. ‘In addition, the ability to cheaply and efficiently store thermal energy directly in the heated particles will enable power production at night and on cloudy days.’

Sandia's partners in the project are the Georgia Institute of Technology, Bucknell University, King Saud University in Saudi Arabia and the German Aerospace Center. The project is funded by the U.S. Department of Energy's SunShot Initiative.