The City of Norfolk and Nebraska Public Power District (NPPD) are celebrating the end of the construction phase for the largest solar farm in the state, which is paired with the NPPD’s first large-scale battery storage system.

The array is part of NPPD’s community solar program, SunWise, allowing local Norfolk residents to purchase clean energy produced from the array at a fixed price to offset normal retail electricity. Sol Systems and NPPD entered a 30-year power purchase agreement (PPA) for the energy of the array.

“The Norfolk community solar facility is going into operation, and it is great to officially celebrate the completion of the state’s largest solar facility,” says Brittney Koenig, NPPD’s account manager. “Norfolk customers who have signed up for community solar shares began to see a credit on their bill starting in June.”

“We’re excited to officially launch this project,” comments City of Norfolk Mayor Josh Moenning. “Participating community members will soon be able to utilize affordable, locally generated clean energy for the first time in this form and fashion. We’re proud to have worked collaboratively with NPPD and the private sector to provide the opportunity. It adds to our quality of life.”

The large-scale battery storage system is capable of storing up to 2 MWh worth of electricity produced by the solar farm. This will allow NPPD to store solar energy for flexible discharge times, like summer evenings or winter morning during its grid peak times.

During construction, the project site was planted with pollinator habitats to support local bee and butterfly populations. Prairie flowers and grasses will build up a thriving native habitat, stabilizing and supporting soil health while providing habitat for species at risk.

“Sol Systems is proud to be a part of this solar + storage project with NPPD and the City of Norfolk because it fully captures what is at the core of Sol’s mission,” states Anna Toenjes, senior director of business development at Sol Systems. “The project will service this community with clean, renewable energy for decades while creating strong community impact through our scholarship work with NECC. In addition, I am personally proud to have been a part of an all-female team at Sol that led the contract negotiations, development and financing of this solar + storage project.”

In addition to the energy and educational benefits of the array, Sol Systems partnered with Northeast Community College (NECC) to establish three scholarships for students interested in the school’s Electrical Construction and Control Program. The scholarships, which cover two years of tuition for students, were awarded this spring. In further partnership with NECC, internships with GenPro were established for students already enrolled in the Electrical Construction and Control Program, providing them with hands-on experience helping to construct the array.

“As the EPC that has constructed the most municipal solar arrays in the State of Nebraska, it is really important that we can give back to the communities we serve,” mentions Molly Brown, EVP of corporate strategy at GenPro. “Education is at the core of who we are, and the partnership with NECC allowed us to train the next generation of solar electricians. We need more skilled labor as this industry continues to grow.”

“We are proud to be part of the ongoing effort to develop clean energy in Nebraska,” says Cliff Mesner, owner of Mesner Development. “Our mission is to provide every Nebraska community with the opportunity for high quality, affordable clean energy integrated with local public power districts and municipal utilities.  We believe in public power and we are inspired by the leadership in Norfolk, Neb.” 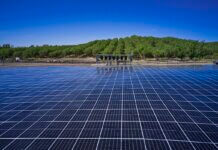