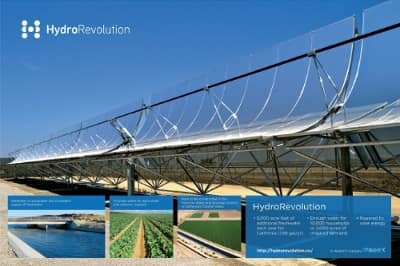 HydroRevolution, a California subsidiary of WaterFX, has announced plans to build a solar-powered desalination plant in the Panoche Water and Drainage District in California's Central Valley.

Once constructed, the plant will provide a highly sustainable water source to local water districts by using solar energy to recycle salt-impaired water into freshwater.Â This technology will be the first of its kind in the Central Valley, says the company.

The system is a concentrated solar still that uses large solar arrays to capture thermal energy. The sun heats mineral oil, which then flows to the multi-effect distillation system that evaporates freshwater from the source water. Over 90% of the freshwater is recovered in this process, while the briny remainder can be further treated to produce minerals and salts as useable, solid co-products.

The plant, using Aqua4 technology developed by WaterFX, will be built on 35 acres of land. HydroRevolution will be able to generate enough water for 10,000 homes or 2,000 acres of cropland. All freshwater generated will be made available to Panoche and other nearby water districts.