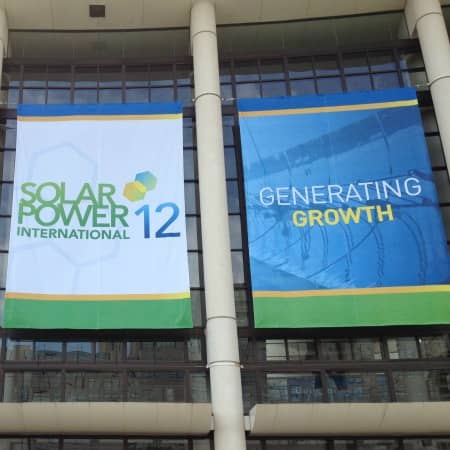 The solar sector's key leadership figures harbor no illusions about the difficulties facing our industry, even as installations continue to bloom in the U.S.

This negativity may seem out of place at a time when the industry just posted another record-breaking installation total – 742 MW – for the second quarter, according to recently released data from SEIA and SEPA.

But asÂ Rhone Resch, president and CEO of the Solar Energy Industries Association (SEIA),Â reminded the crowd, complicated – even paradoxical times – are here for the solar market. Quoting the famous opening lines of Charles Dickens' novel A Tale Of Two Cities, he described the state of the industry as the ‘best of times’ and ‘worst of times’ – an ‘age of wisdom’ and ‘an age of foolishness.’

‘By now, you know that your business has matured,’ Resch said. ‘We're facing new challenges today.’

Even as solar installations grow to the point where the majority of U.S. residents now live in states with more than 50 MW installed, increasingly fierce political headwinds are now battering solar energy's image.

‘Our industry is under direct attack,’ Resch plainly stated. He noted that super-PACs funded by fossil-fuel industries have created an unprecedented volume of campaign ads slamming solar energy. In fact, 80% of the negative campaign ads so far have focused on clean energy, according to Resch.

The ads mirror action in the halls of Congress, where bills to eliminate the critical investment tax credit (ITC) – among numerous other anti-renewables proposals – have been floated in both the Senate and the House of Representatives.

Despite all of the anti-solar noise on the airwaves and in Washington, the six industry executives who joined Resch andÂ Julia Hamm, president and CEO of the Solar Electric Power Association (SEPA),Â at SPI's opening session disagreed about the degree to which the outcome of the 2012 U.S. presidential election will actually affect the solar sector.

‘As soon as the elections are over, common sense will set back in,’ added Jurgen Krehnke, president and general manager of SMA America.

Eric Silagy, president of Florida Power & Light (FPL), forecasted that although the president himself will not drive solar policy much, he will set the tone in Washington, thus possibly determining whether the solar sector will continue to receive support.

At least one fact is certain: ‘The Ryan budget calls for repealing all incentives for clean energy – not in 2016, but this year,’ Resch pointed out.

Not the enemy?
While outlining three potential scenarios for the solar market 20 years from now – ranging from solar as a mere fringe player to solar as the provider of 30% of the U.S.' electricity needs – SEPA's Hamm noted that in addition to both political and economic issues, utility-related issues could slow momentum and prevent the industry from seeing the more positive scenarios happen.

Existing net-metering policy has helped support a number of PV installations. However, utility-led efforts to roll back or limit these policies will continue to pop up. Net metering, ultimately, will not be sustainable as a solar-utility business model once penetration levels reach a certain point, Hamm added.

‘Isn't it in the best interest of everyone to invest the time and effort today to develop a regulatory structure that allows for long-term solar-utility business model?’ she asked.

Hamm called on the industry to partner with utilities on creating a ‘utility of the future’ – perhaps one that focuses on providing grid access and ancillary services rather than power.

‘Distributed generation is clearly an interruption to the way that utilities work today,’ he said.

Silagy insisted that utilities are not ‘the enemy,’ noting that FPL and other utilities have made major strides in adding solar power to their generation mix, even when customer priorities focus on reliability and price rather than emissions profiles. ‘It is short-sighted to generalize on utilities,’ he said.

Furthermore, utilities and policymakers do not pose the only roadblocks to a successful solar sector. With installation growth comes an increased risk of greediness and dishonesty among solar companies themselves, Resch said.

The incidence of questionable accounting practices – such as ITC fraud, basis inflation for Treasury 1603 grants, and leases with excessive escalation rates – has quietly been common knowledge in the industry, but at a time when solar's image is already under attack, these ethical violations will soon be exposed to the public.

The next issue of Consumer Reports will feature a story calling the practices of certain solar firms ‘the biggest scam in the U.S. today,’ Resch warned.

He urged attendees to play by the rules, noting that the industry's entire reputation is at stake. Any member caught violating SEIA's code of ethics will be immediately expelled from the organization, he added.

With all of these challenges – both external and internal – can the solar sector emerge stronger? Most of the speakers and panelists agreed that the political uncertainty, utility controversies and ethics reinforcement all constitute necessary growing pains.

‘This is going to be a battle, and one that we must have,’ Resch said.