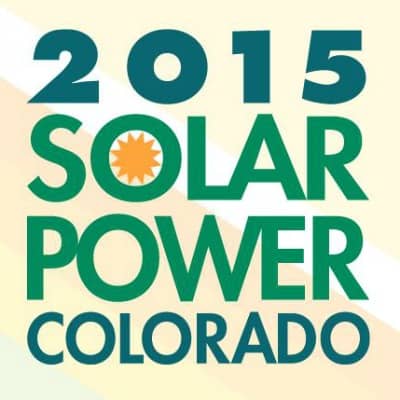 The theme of the Colorado Solar Energy Industries Association's (COSEIA) Solar Power Colorado 2015 conference ostensibly was celebrating the last-quarter century and looking forward to the next one.

Most of the industry experts seemed to agree that the outlook extending to 2040 is positive. There was a lot of discussion, however, on how to make it through the next few years, first.Â

‘We need to have a bigger vision of the future,’ said Hank Price, chief technology officer of Abengoa Solar and a member of the opening session panel for solar CEOs and executives. ‘We need to move the discussion to what is the long-term vision for energy for Colorado, for the country and for the world, what is the path to achieve that, is solar the right technology, and does it have a key role to play.’

Price added that the developer is already looking beyond 2016 and the end of the federal investment tax credit (ITC). ‘It takes us longer than two years to build a plant,’ he said. ‘So, we are in the post-ITC world.’

Panel moderator K.K. DuVivier, a University of Denver law professor, started the session by asking what it will take for solar to become the primary energy source.

Glen Davis, CEO of RES Americas, said cost and system reliability give solar an advantage. Other factors that can help solar include battery companies developing better storage technologies and a shift from centralized to decentralized decision=making in energy generation.

‘One of the things about PV is modularity,’ Davis said. ‘Whether you build on a roof or you have hundreds of modules in a field, you are not losing economies of scale by going smaller.’Â

There are still some challenges, said Paul Spencer, founder and CEO of the community solar developer Clean Energy Collective." Equipment is down in price and up in efficiency,’Â he said. ‘That's a great trend but a smaller piece of the pie in terms of the overall cost of solar. The other costs, such as design, interconnection, permitting, legal fees and finance costs, still need to decrease.’

One factor that Spencer said is not a threat – although it has gained some attention – is falling oil prices. Most states do not burn oil for electricity, so the only effect oil prices will have will be in shipping costs.

Carbon pricing is important though, said Lou Villaire, co-owner of the installer Atlasta Solar Center. ‘We need to stop fossil fuel companies from polluting for free,’ he said.

Customers of the installer often say they want solar because they want to reduce carbon emissions.

‘Whatever reason you want to do solar is fine with us,’ Villaire said. ‘People want a radically different energy portfolio than they have today.’ Â

People also want solar installations on their homes to positively affect resale values. Villaire noted that it helps that real estate appraisers are gaining knowledge of how to value a residential solar installation.

Community effort
Of course, not everyone wants solar on their home, so community solar gardens were a major topic at the conference. During one community solar panel, J.W. Postal, senior vice president of the community solar company SunShare, said he expects the Colorado Community Solar Gardens program, which was created by legislation in 2010, to be expanded. ‘Community solar has an opportunity to be a game-changer,’ he said. ‘All citizens can participate. Consumers will choose the better fuel. That's the future. It may be disruptive to some businesses, but that's where the world is headed.’

Community solar programs are an example of states taking an increasingly important role in solar development opportunities, either through regulation or legislation.

‘I don't trust the federal Congress to get anything done, so it comes down to the states,’ said Jared Schoch, principal at Turning Point Energy, a development, investment and advisory firm. ‘We can look at rates, from commercial, residential and community solar, and how to make the rate structure work so customers want to do solar. If not, I think we will have a shakeup in 2017. I don't see us getting around it.’Â

The states' efforts can be a positive force, said Mark Safty, a partner with the law firm Holland and Hart. ‘There is tremendous justification for hope in this area,’ he said. ‘We have a federal government that has certain powers, then 50 states that are generally free, which means at least 50 laboratories for rollout and deployment of this change.’

Colorado is doing its part with rolling out changes. At another session on solar financing models, speakers covered topics such as power purchase agreements for residential customers, property assessed clean energy (PACE) financing, green banks, credit unions and other methods to finance projects. Moderator Ryan Arney, a partner with the law firm Davis Graham & Stubbs, invited panelists to look at the future of finance.

One tool might be a new version of PACE financing, which helps building owners pay for energy improvements. PACE for residential solar installations ended in 2010 with the Federal Housing Finance Agency's rule against the program, although these have been coming back to life, led by efforts in California.

Paul Sharfenberger, director of finance and operations for the Colorado Energy Office, said Colorado is getting ready to roll out a commercial real estate version of PACE financing this spring. Connecticut has a commercial version called C-PACE, and New York has the Energize Commercial New York program.

‘You have building owners who are paying utility bills, but the tenants are enjoying the benefits,’ Sharfenberger said. ‘Commercial PACE offers benefits that commercial property owners can pursue. It stays with the property; it's 20-year financing at six or seven percent interest, which is fairly commensurate with other commercial lending products.’

There are other alternatives, such as credit unions and green banks, said Blake Jones, president of Namaste Solar. But one finance issue must be settled first and foremost:

‘The number one thing I want is defending net metering,’ Jones said. ‘Plain and simple.’