Ray Thackeray founded the International Rescue Group (IRG) as a charitable organization to deliver relief supplies and disaster response to coastal communities. Based in Alameda, Calif., the IRG stages its growing fleet of vessels from several North American ports, embarking on disaster response missions that may last several months to a year.

Increasingly, the organization has come to embrace solar power as an important component of such missions, both as a means to provide relief services and to enhance the ability of ships and crews to remain on station.

Thackeray unhesitatingly cops to drawing inspiration for the IRG's name and the vessels under its banner from the U.K. TV series ‘Thunderbirds,’ produced in the 1960s. That International Rescue organization had a fleet of high-technology rocket planes, spacecraft and submersibles that responded to distress calls around the globe. Thackeray's organization relies on donated boats, several of which are sailing yachts.
{OPENADS=zone=72&float=right&margintop=10px&marginleft=10px}
Nevertheless, IRC's Thunderbirds – and they name most of their rescue craft along the same lines – sail to scenes of natural disasters bearing relief supplies, expertise and labor, all of which are donated or volunteered.

The IRG flagship, Thunderbird 2, is a 57-foot steel sailing trawler with a 10-ton cargo hold and a diesel-electric hybrid drive engine. In 2012, BenQ Solar donated six EcoDuo PM220 240 W multicrystalline solar panels. The panels were mounted on a welded steel frame in a canopy configuration over the vessel's flybridge. Outback Power provided two of its FLEXmax 80 maximum power point tracking charge controllers to enable the vessel to essentially operate all of its on-board electronics under the right conditions, using 1.5 kW of solar power that produce about 5.76 kWh of electricity per day.

According to Thackeray, the boat's daily communications, refrigeration and lighting load at anchorage average about 2 kWh per day. The surplus is used to run desalinization systems that produce fresh water using a process of reverse osmosis. Thackeray's rough estimate of the water-maker's power consumption is about 15 Wh per gallon, resulting in an output of 250 gallons per day.

‘That means by sunlight alone, without having to start up a diesel-guzzling generator, we will be able to provide enough perfectly clean drinking water to keep 1,000 people alive,’ Thackeray says. ‘This is a huge deal!’

In the wake of a disaster, fresh water is one of the first things survivors need and one of the hardest things to obtain, particularly in coastal regions with significant damage to infrastructure. Time only exacerbates this problem, as standing water becomes brackish or contaminated by waste. For this reason, the IRG is putting water-makers on all of its vessels.

While the greenness and environmental footprint of the IRG's activities are of concern to many of those who volunteer time and money, Thackeray admits he is much more operationally minded and practical about the benefits of solar power. A vessel equipped with solar power and storage is able to operate its equipment and remain on station longer than with diesel power alone.

‘Docking fees are out of the question,’ Thackeray says. ‘This means no electricity from shore power. From my perspective, solar simply makes sense. If we are using the diesel generators less, we can stay on station longer. The storage gives us the ability to stand at anchorage.’

The solar rig on Thunderbird 2 has been operating in a harsh maritime environment for nearly a year without any problems. The IRG's latest acquisition, a 97-foot steel gaff-rigged ketch christened Thunderbird 5, is being eyed for a solar refit. A narrow sailing yacht, her captain, Michael McElhaney, says providing for the array is a bit of a challenge.

‘On a sailboat, there are lots of things moving around,’ he says.

Thunderbird 5 is currently on a mission to provide relief to people in Haiti suffering from an outbreak of cholera, stemming from the massive earthquake in 2010. For more information on the IRG and its coastal disaster response mission, click here. 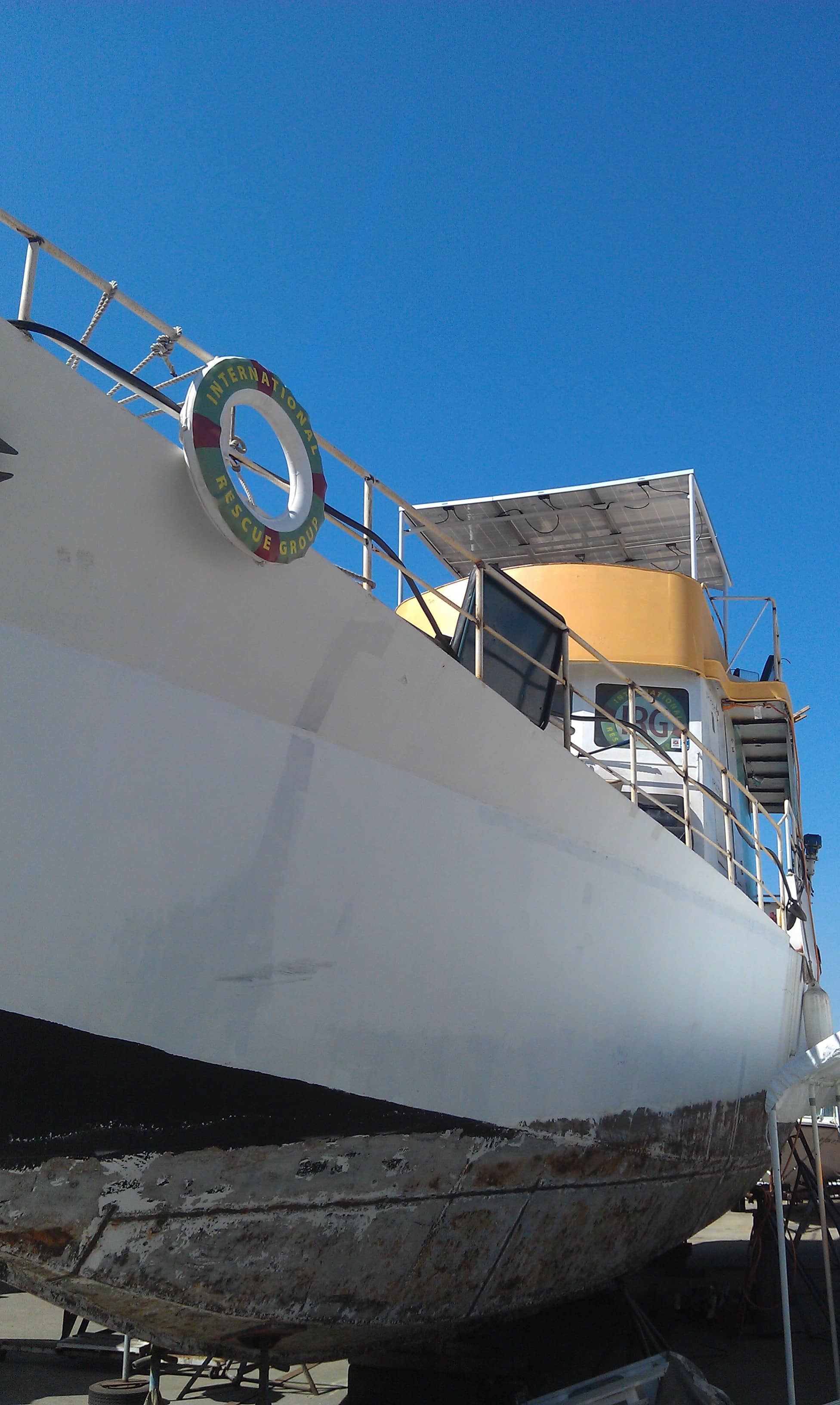