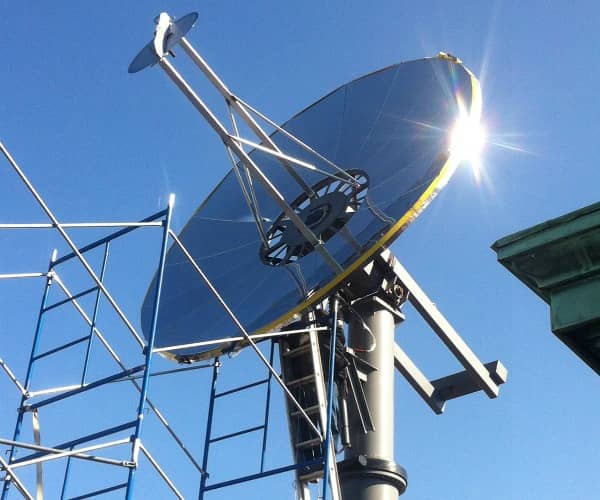 One challenge for renewable energy innovators is that while they aim to efficiently convert natural resources into energy, they often have limited resources and manufacturing expertise.

‘The biggest hurdle in the U.S. has been price because renewable energy subsidies and supportive regulations come and go,’ says Paul Eisenhuth, president of CEWA Technologies, a Wyomissing, Pa.-based developer of concentrating solar power dishes and solar tracking technology to produce electricity and thermal energy. ‘Green energy will really ramp up when it meets affordable mass-scale price points without unreliable subsidies.’

According to Eisenhuth, one of CEWA's large solar concentrator dishes is capable of delivering 33.5 kW of thermal power, 14 kW of electricity or a combination of the two.

When CEWA Technologies needed a prototype part to keep its test development program running, Eisenhuth chose to work with a metal component fabrication provider rather than try to produce components in house.

‘As a renewable energy start-up, I don't have the time, capital or expertise to build sufficient manufacturing capability from scratch,’ says Eisenhuth. ‘Not when high fixed costs in facilities, equipment and trained labor, or underutilized capacity, could sink the business.’

Eisenhuth says that partnering with Summit Steel Manufacturing of Reading, Pa., has enabled his company to produce solar concentrator dishes at a price that is competitive with fossil fuels without government subsidies.

‘Our whole testing program was at a standstill until a prototype piece was made for one of our supports,’ says Eisenhuth. ‘I expected it to take two weeks, but they helped us design and draw it and got it to me in three days. We successfully continued our test program and saved our funding.’