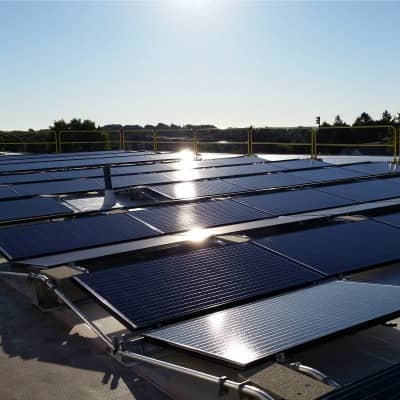 It has been a year since the merger of SolarCity and Zep Solar. The fist major product born of that union reveals market directions on two significant issues: the future of the commercial-scale market space and the significance of east-west-facing solar as a possible solution to utility load curve problems.

First and foremost, the new ZS Peak line of flat-roof mounting and racking systems puts SolarCity's marker squarely on the commercial-scale space. The company says the new commercial line inherits the same characteristics of snap-fit assembly and automatic grounding from its residential line. This is largely made possible through a requirement for Zep-compatible grooved modules.

While the company highlights the labor-saving advantages of this design approach, the product says a lot about where SolarCity and Zep Solar, which operates as an independent business unit, see the commercial solar space headed.

The ZS Peak racking and mounting system is intended specifically for flat commercial rooftops. Flat roofs pose a specialized engineering problem because of aerodynamics and weight constraints. In part, such constraints come from the ‘cookie-cutter’ nature of many flat-roof commercial buildings that make ideal solar candidates, whether they be big-box retail stores or logistics centers and warehouses.

‘When we start looking at flat roofs, we realized that the biggest problem fundamentally is weight,’ West says. ‘We had to get better aerodynamics because aerodynamics drive weight. The better your aerodynamics are, the less the wind is going to try to yank the panels off the roof and the less weight you have to have to hold everything down.’

As it turns out, an east-west orientation of the solar panels counters some of the aerodynamic issues with south-facing roofs. South-facing rows have an inherent problem, West says, in that the slanted panels produce an air scoop in the back end. On a rooftop, this is typically solved with a wind deflector.

‘Studying this carefully, this is what led us to an east-west orientation,’ West says. ‘That was a big key decision that we made, to orient our collectors so that half of them are facing east and half of them west. By doing that, we were able to get significantly improved aerodynamics by closing off, so to speak, the back side of the triangle. Also, we did not have to have a wind deflector. We get rid of a part and actually use a panel for that.’

The main drawback of east-west-facing systems is that the overall electricity yield during the day is typically lower than for south-facing systems. Zep Solar's engineers counter that the lower noon peak is compensated for by having more kWh collected during the early mornings and late afternoons. Moreover, the paired arrangement of the east-west aligned panels enables at least 20% more of them to be put on the roof.

‘It's really the total energy from the roof that matters the most, and panels being as cheap as they are, it's in the noise,’ West says.

Interestingly, the notion of shouldering the yield curve away from the noon peak is also on the minds of utilities and grid operators. Earlier this month, the California Energy Commission (CEC) released a new set of guidelines encouraging the deployment of photovoltaic power systems in an east-west orientation, with a particular emphasis on the latter.

The CEC points out that PV systems with panels that face west are designed to make the most of the late-day sunshine when electricity demand in the state is the highest. Along with the guidelines is a monetary incentive that can be worth up to $500 for going west.

‘By encouraging west-facing solar systems, we can better match our renewable supply with energy demand,’ says says David Hochschild, lead commissioner for the agency's renewable energy division, in a statement.

A year down the road, West says his company's merger with SolarCity has been beneficial from a product-development standpoint. SolarCity was Zep Solar's biggest customer before the merger, so West says they had a keen eye on making them happy to begin with.

‘The SolarCity merger as been a excellent marriage,’ he says. ‘From an engineer's perspective, I feel we can solve any problem, but we have to know what the problem is. Now we have instant access to a customer's view of what the problems are.’

SolarCity is currently installing its first project with ZS Peak for the city of Quincy, Mass., and expects to begin installing the product in volume in January.