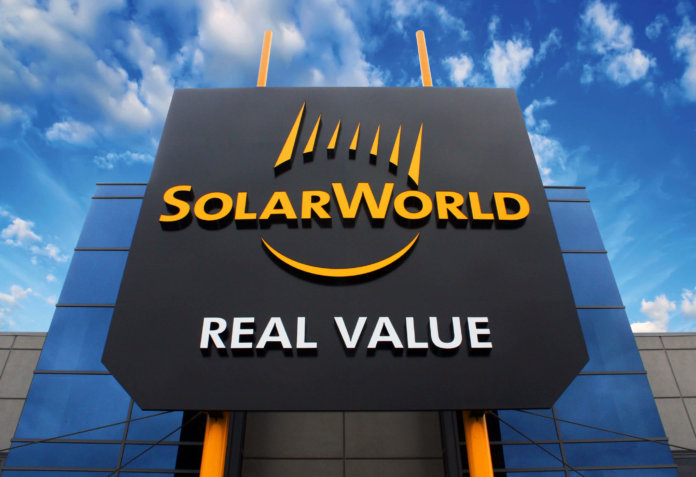 Shortly after the U.S. International Trade Commission (ITC) decided to move forward with an investigation into Suniva’s controversial trade petition, SolarWorld Americas Inc. has announced it filed with the ITC to become a co-petitioner.

The news comes as a shock, as SolarWorld Americas initially suggested that it did not support Georgia-based Suniva’s case: When Suniva filed its petition in April, Juergen Stein, president of SolarWorld Americas, said the company “will assess the case brought by Suniva but prefers that any action to be taken against unfair trade shall consider all parts of the U.S. solar value chain. We’re committed to helping to find a way that also considers the interests of other parties playing fair in the U.S. solar market.”

Since then, though, German parent company SolarWorld AG declared bankruptcy in local court. And although SolarWorld Americas, which operates a large PV manufacturing facility in Hillsboro, Ore., said it would maintain operations, the U.S. subsidiary also recently notified all of its workers about an impending mass layoff and potential plant closure.

In a new announcement, SolarWorld Americas says it has now joined the ITC case because the U.S. solar market “remains highly distorted by state-sponsored overcapacity and exports from China and other countries.”

“We have hoped and waited for serious proposals for settling the overall U.S. solar industry’s trade tensions with China, but we have received none,” says Stein in the announcement. “Therefore, we have decided to join the case to pursue the best remedy available to us to restore fair competition in the U.S. market.”

“The U.S. solar industry cannot afford to give away the future of critical renewable energy manufacturing industries,” Stein continues. “We must take a stand in favor of preserving intellectual property, production know-how and U.S. manufacturing jobs, all of which have sprung from a vital industry pioneered on U.S. soil since the 1970s.”

SolarWorld Americas, which led the fight for the U.S. government’s previous anti-dumping and anti-subsidy duties against Chinese and Taiwanese imports, argues the “surge” of cheap imports into the U.S. continues because Chinese manufacturers have set up shop in other regions to avoid the duties.

Under an obscure trade law known as Section 201 of the Trade Act of 1974, bankrupt PV manufacturer Suniva filed its petition with the ITC in April asking the federal agency to conduct a “global safeguard” investigation into whether imported crystalline silicon photovoltaic (CSPV) products are causing “serious injury” to U.S. manufacturers. Unlike the previous U.S. measures against China and Taiwan, though, Suniva’s Section 201 petition would apply to all foreign-made CSPV imports, rather than focus on products from a particular country.

“Section 201 is intended to afford a domestic industry the time to adjust to import competition through the application of temporary trade measures on applicable imports,” explains Matt West, a partner at law firm Baker Botts’ Washington, D.C., office. “Section 201 differs from other U.S. trade measures, notably anti-dumping and countervailing duty investigations, in that Section 201 investigations are global in nature and not focused on specific countries, do not require an allegation of an unfair trade practice, and have a higher standard for injury and causation in order for remedies to be imposed.”

In its petition, Suniva has proposed an initial import tariff of $0.40/W per CSPV cell and a minimum import price of $0.78/W per module. According to analysts, that would effectively make foreign-imported modules into the U.S. the most expensive in the world and pose a “severe threat” to the country’s future PV deployment.

For its part, SolarWorld Americas simply says in its announcement that the company will “make a remedy recommendation at the appropriate time in this proceeding.”

Suniva’s petition has faced backlash from various industry stakeholders, both domestic and abroad, and the Solar Energy Industries Association (SEIA) had previously vowed to lead the fight Suniva’s petition and argued that it puts thousands of U.S. jobs in jeopardy.

In a new statement, Abigail Ross Hopper, president and CEO of SEIA, says, “The Section 201 case is a conversation about a sector of the solar industry, not just a particular company. We look forward to working with the International Trade Commission and all stakeholders to make sure that the broader solar industry can continue to thrive and build on the 260,000 Americans now working in solar.”

She adds, “The potential damage to the solar industry as a result of this petition could kill many thousands of American jobs and put a stop to billions of dollars in private investment.”

Notably, the ITC’s ruling to move forward with an investigation and SolarWorld’s decision to join as a co-petitioner help solidify the agency’s determination that the case is “representative” of the U.S. solar manufacturing industry – an important requirement for a Section 201 case.

Suniva says it has amended its petition to add SolarWorld Americas as a co-petitioner.

“Suniva welcomes SolarWorld to this important battle,” says Matt Card, Suniva’s executive vice president of commercial operations, in a statement. “SolarWorld’s ongoing efforts to protect U.S. solar manufacturing are long and well-established, and we are pleased they are joining this latest effort with us, as our industry now speaks with one, unified voice.”

As previously reported, the ITC plans to make its injury determination by Sept. 22. If it finds injury, the ITC will recommend a remedy by Nov. 13 to President Donald Trump, who will ultimately be tasked with making the final decision.

Trump and his team have previously singled out Section 201 as a potential remedy for trade issues.

“The Trump administration made significant statements in its 2017 Trade Policy Agenda about the importance of Section 201, noting that these safeguard measures ‘can be a vital tool for industries needing temporary relief from imports to become more competitive,’”  says Baker Botts’ West. “Given the president’s position in his Trade Policy Agenda, it would be politically difficult for the administration to refuse to impose relief if the ITC makes an affirmative finding of injury to the domestic industry represented by Suniva.”

West continues, “Also, if the president imposes the trade relief measures requested by Suniva, he may be able to indirectly benefit traditional energy providers, which he has been supportive of in the past. Looking at these factors as a whole, there is probably a good chance that the president will impose some level of trade relief on the imports of CSPV cells, if the ITC finds affirmative injury in this investigation.”