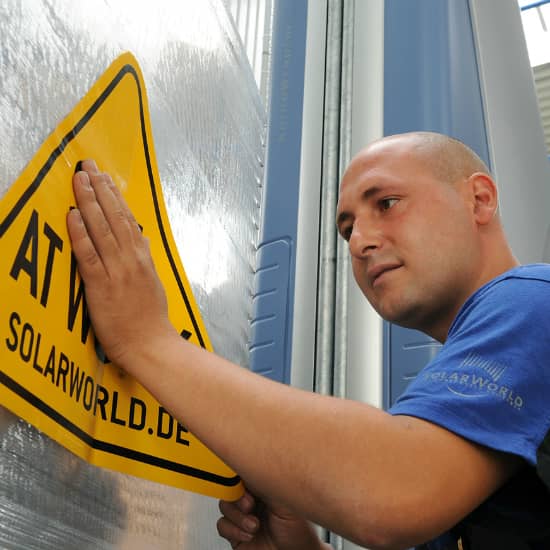 For SolarWorld, the past few days have brought a glimmer of good news – and a great deal of more-somber news.

First, according to the SolarWorld USA-led Coalition for American Solar Manufacturing (CASM), tariffs applied to Chinese solar modules have officially slowed the flow of solar products from China into the U.S.

In their anti-dumping complaint and countervailing-duty petition filed with the U.S. Department of Commerce (DOC) last fall, SolarWorld and its CASM partners warned that ‘Chinese producers and exporters have pushed – and will continue to push – large and growing volumes of dumped and subsidized [crystalline-silicon PV] products into the U.S. market, regardless of demand.’

While the volumes remain large, they no longer appear to be growing. The CASM's analysis of DOC data shows that in June (the first month during which both anti-dumping and anti-subsidy tariffs were in full effect), Chinese solar imports totaled $99.6 million – compared to $241.5 million in June 2011. Chinese imports have now fallen year-over-year for three consecutive months.

‘The year-over-year decline is significant and reflects the market's rising recognition of the costs, risks and uncertainties associated with importing Chinese solar cells and panels,’ the CASM stated in a press release.

Meanwhile, imports from several other Asian countries, including Taiwan and the Philippines, rose significantly during the time period studied – possibly indicating illegal tariff evasion, according to the CASM.

But are tariffs – and the drop in Chinese imports that the CASM has linked to those tariffs – enough to save solar manufacturing in the U.S. and Europe?

Several industry analysts and other experts have already expressed their doubts that tariffs against China will help even SolarWorld itself. Although it remains too soon to see what the long-term effects of the DOC's trade intervention will be, the latest financial results from SolarWorld USA's German parent company paint a distressing picture.

As Chairman and CEO Frank Asbeck wrote in a letter to employees and shareholders, the numbers ‘leave much to be desired.’

Overall, despite increased global module shipments, SolarWorld posted a dramatic drop in revenue for the second quarter – 43.8% lower than that for the second quarter of 2011, according to a financial document describing first-half results. Its stock price has plummeted 58.5% since the beginning of the year.

Perhaps even more worryingly, SolarWorld acknowledged that it will not achieve positive earnings (before taxes and interest) this year. The statement sent murmurs of impending bankruptcy flowing through the industry rumor mill, but for now, the company has not announced any such moves.

As announced last month, SolarWorld recently extended its trade battle to Europe with an anti-dumping complaint filed through its EU ProSun coalition, which the company says represents more than 20 European solar manufacturers. The EU Commission is expected to rule by mid-September on the complaint.

Preliminary results of that investigation will be announced no more than nine months later, and a final decision is anticipated by the end of next year, SolarWorld noted in first-half 2012 report.

In the meantime, forces other than Chinese dumping also appeared to play a role in weakening SolarWorld's financial vital signs. For instance, the extended disputes over the future of Germany's feed-in tariffÂ – which eventually ended with a still-controversial compromise in late June – cut into SolarWorld's sales.

‘Demand among German customers for complete kits for roof-mounted systems – one of SolarWorld's especially lucrative market segments – dropped off noticeably in the second quarter,’ the company wrote in its report.

Increased sales in Italy and the U.S. – particularly in the large-scale PV plant business – helped to partially overcome the weakness in Germany. SolarWorld noted that it plans to more aggressively pursue internationalization in order to combat ‘strong fluctuations in demand in the individual markets.’

As a result of these and other factors – including, of course, the dramatic downward trajectory of module prices in the overall market – SolarWorld ran into trouble meeting its financial agreements during the second quarter and renegotiated 372 million euros worth of loans with its creditors.Â

‘This will enable us to have greater flexibility, while further strengthening the group's financial stability,’ Asbeck wrote, adding that he has voluntarily waived his salary and dividend until SolarWorld returns to profitability.

Finally, SolarWorld was greeted by another high-profile criticism of its Chinese trade complaint in the past week. VDMA, a German industry association representing more than 100 PV equipment suppliers, called out SolarWorld and its EU ProSun colleagues for threatening the free-market access that they believe is essential to the health of the PV manufacturing industry.

‘The last thing the German photovoltaic equipment industry now needs is a lengthy and unprofitable trade conflict with one of its core markets,’ said Florian Wessendorf, VDMA project manager, in a statement.

Wessendorf added that that PV manufacturing can succeed in Europe without what he and VDMA believe is ‘harmful’ protectionism.

Asbeck made clear that SolarWorld intends to continue fighting its battle, regardless of its detractors. ‘Surrendering the market to China would only slow technological development and would, sooner or later, lead to higher prices and less expansion of solar energy,’ he wrote.