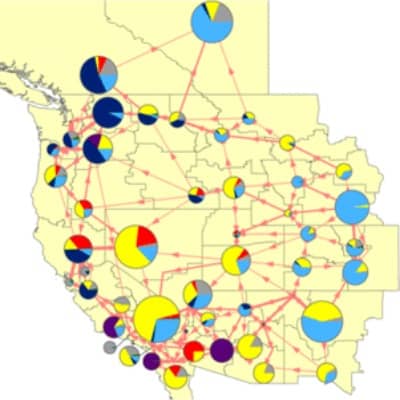 The U.S. Department of Energy's (DOE) SunShot Initiative funds research and sets goals with the overall objective of making solar power cost-competitive with other forms of power generation by 2020. SunShot's magic number for utility-scale solar is $1 per watt, which the DOE says represents about $0.06 per kWh.

A recent study conducted by the Renewable and Appropriate Energy Laboratory (RAEL) at the University of California, Berkeley, finds attaining this goal would enable utility-scale solar to meet about a third of the electricity requirements of the western region of North America by 2050. The study, published in the journal Environmental Science & Technology, says SunShot's target, if hit, would enable central-station solar to supersede natural gas generation and reduce the need for nuclear and carbon capture and sequestration technologies.

The study authors say that a diverse portfolio of technological options and a balance-of-systems approach would help integrate solar generation into the grid successfully and cost-effectively. In particular, the report says the deployment of GW-scale storage would play a central role in utility-scale solar development with its ability to handle flexible load requirements.

In the scenarios investigated, achieving the SunShot target was shown to decrease power costs by up to 14%, saving up to $20 billion (in 2010 dollars) annually by 2050, the study says.

Of course, the study's focus was on the implications of reaching the DOE's cost targets and does not have any special insight into how such goals are to be achieved – only that getting there would seem to be a good idea.