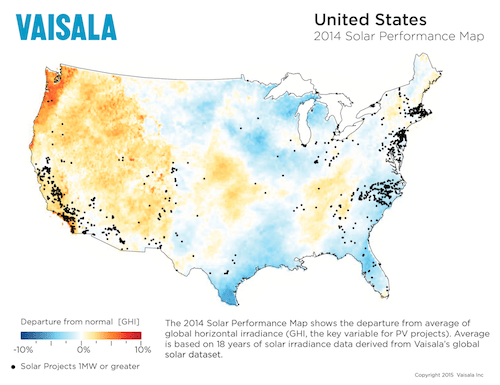 Analysis from Finland-based forecasting firm Vaisala says the East Coast of the U.S. experienced up to 5% lower than average levels of solar irradiance in 2014, negatively impacting overall performance of solar sites in the region.

Concurrently, the West Coast enjoyed irradiance levels up to 10% higher than average, widening the productivity gap between projects in the country's two areas of highest solar development.

From an annual perspective, 2014's weather patterns had an adverse effect on a large number of installations along the Atlantic Coast – from Florida to Massachusetts – as well as Texas, Vaisala's report says. At the same time, the bulk of projects in California and the Southwest saw an uptick in solar irradiance that may have increased overall annual production at many sites.

However, these annual variations only offer a high-level view of project performance, Vaisala says. The company also conducted a monthly analysis that gives a much more robust understanding of how specific weather conditions affected solar production throughout the year.

For example, the report says that summer 2014 was the coolest summer since 2009 and the ninth wettest summer on record within the continental U.S., with cloudy conditions leading to below-average solar irradiance. This meant underwhelming solar performance in many regions where there are large numbers of operating projects, and negative media attention for solar projects recently brought online, such as Ivanpah, Agua Caliente, Solana and Topaz.

‘The fact that California, for instance, had higher than average irradiance over the course of the year doesn't tell the whole story,’ says Gwendalyn Bender, energy assessment product manager at Vaisala. ‘We actually have many clients with projects in California coming to us with concerns about last year's production numbers. As seen in our study, monthly low solar irradiance anomalies had a significant impact on generation, even in the West.’