Long Island-based SUNation Solar Systems Inc. has completed the first 388 kW phase of a two-array rooftop project for IVY Enterprises Inc. of Port Washington, N.Y. Construction of an adjacent building is under way that will support a 329 kW photovoltaic system when complete.

According to SUNation president and CEO Scott Maskin, commercial projects like the one for IVY Enterprises require serious commitment on the parts of both installer and customer. A veteran of residential, commercial and municipal projects, Maskin says commercial rooftops are very different from houses, not just in terms of size but in the character of the engineering challenges. On a house, he says, he and his team know what to look for. Commercial buildings tend to be more varied and complex structurally.

‘Commercial projects require a committed owner,’ Maskin says. ‘These projects can be so fragile. You must have a good relationship with the customer in order to proceed.’

By fragile, Maskin refers to the myriad problems that could cause a commercial building owner to pull out – from zoning and codes, to changes in the incentives on offer. Because commercial projects require a serious investment in resources and material on the part of the installer, such a result could be ruinous.

Fortunately, Maskin says, IVY has proven to be a dedicated client and were ready to commit after studying the costs and benefits. ‘We were able to put up over 1,386 modules in three days,’ he says.

The second phase of the installation will require 1,160 modules. SUNation is installing SOLON SOLquick integrated solar module and racking units. When complete, the net-metered systems are expected to produce over 892 MWh of electricity per year, which Maskin says will offset about a third of the existing warehouse's load and half of the new building's. 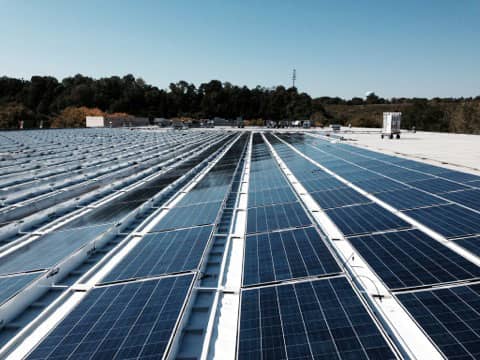