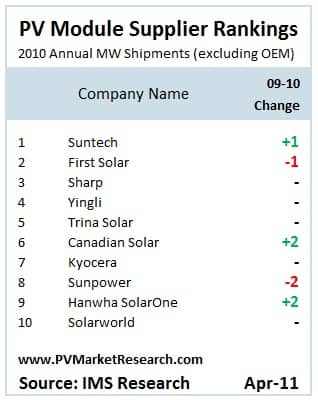 Suntech was the largest PV module supplier in 2010, growing its shipments by more than 130% over the previous year, to ship more megawatts than any of its competitors, according to a new report from IMS Research. First Solar, which held the top spot in 2009, fell to second place, increasing its shipments by less than 50% – although the total market more than doubled.

IMS Research's analysis of the global PV supply chain, based on shipment data from hundreds of suppliers, reveals that although market conditions meant that all suppliers could grow their shipments, some suppliers were able to benefit more than others.

In particular, Chinese tier-one suppliers Canadian Solar and Hanwha SolarOne (formerly Solarfun) both gained two places in the rankings. In fact, all of the suppliers in the top ten that gained rank were Chinese. Conversely, both of the suppliers that lost rank were Western, headquartered in the U.S.

One Western supplier bucking this trend was REC, which moved quickly up the rankings to become the 11th largest supplier of PV modules in 2010, IMS Research says.

‘2010 was an outstanding year for everyone in the PV industry,’ says Sam Wilkinson, PV market analyst at IMS Research. ‘Module suppliers were able to benefit from the strong demand, which lasted all year, and make great increases in their shipments.

‘Five of the top ten suppliers more than doubled them; some even increased them by more than 150 percent,’ he adds.

Another clear winner in 2010 was JA Solar – another large Chinese supplier – which increased its production by nearly 180%, becoming the largest producer of PV cells, after having been only the fifth largest producer in 2009.

However, IMS Research predicts a slowdown in growth for the PV module market in 2012, as many major European markets are expected cool following amendments to incentive schemes.