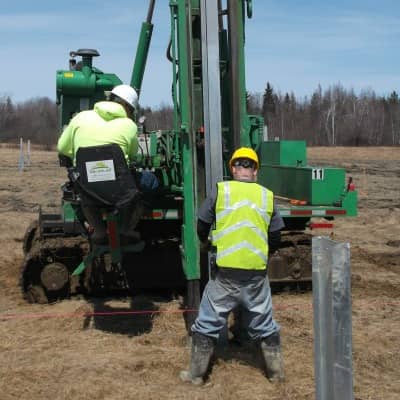 Brownfield sites such as former industrial zones and landfills have become attractive locations for solar development projects. They are generally close to grid interconnection systems and consist of already disrupted and cleared land. Such attractions even hold if the land is a little bit scary.

The Maywood Solar Farm in Indianapolis is on land identified by the U.S. Environmental Protection Agency (EPA) as a Superfund site. The 10.86 MW project, which achieved commercial operation in February, joins the ranks of Superfund solar projects, including a 6 MW photovoltaic array Solar Power Inc. completed on the location of an Aerojet rocket fuel plant in California, and a 1 MW concentrated PV facility Chevron built on its former Questa mining operations in New Mexico.

The EPA envisions many other renewable energy projects on Superfind sites in the future. However, as project participants will attest, building them is no easy task.

The Maywood solar project is located on property owned by Indianapolis-based chemical manufacturer Vertellus Specialties, a company formed through the 2006 merger of Rutherford Chemical and Reilly Tar & Chemical Co., which operated the wood treatment facility near Indianapolis.

Established in 1896, Reilly's facility refined coal-tar that was used to make the wood preservative creosote, which was used to preserve railroad ties and telephone poles in the early to mid-1900s.

However, groundwater beneath the site became contaminated over time through the seepage of chemical byproducts. Back then, business owners were far less concerned with environmental stewardship and did not have the foresight to think about the long-term negative impacts.

‘By the 1970s, that business had all but died,’ says Rich Preziotti, Vertellus president and CEO.

The land sat idle for more than 20 years until Vertellus acquired the property and worked to remediate the land with the EPA, which designated it as a Superfund site.

When the Maywood was cleaned up in the 1980s, it was capped with soil and gravel, and a ground water containment system was installed. As the parcel sat idle, Vertellus had been looking for an opportunity to put the site back into use. And when utility Indianapolis Power & Light enacted an incentive program to entice solar development in 2010, Vertellus quickly moved forward.

However, Underwood says the Superfund site was unique for several reasons. For starters, all of the projects stakeholders – Vertellus, EPA, and Indiana state agencies – had been involved in the site for more than 20 years. Therefore, they all possessed institutional knowledge about all the decisions and site improvements. All the parties involved – including the EPA – expressed commitments to complete the proposed solar development project.

‘Early on, we had a conference call with the EPA to understand their process,’ Underwood says, noting that Superfund sites often carry restrictive covenants that dictate what can and cannot be done at a site. ‘The fact that EPA was enthusiastic and confident the project could be built was a huge X factor.’

The fact that everything was documented would be a big leg up when it came to assessing risk. Identifying the risks helped keep costs down, Underwood says, adding that environmental counsel at Vertellus assisted in providing legal due diligence. Additionally, the utility's incentive program gave Hanwha enough comfort that the project could be financed.

Scratching the surface
Superfund sites may be seen as extreme examples of landfills, which many developers are targeting as perfect locations for solar projects. Joseph Harrison, a senior project developer in the Boston office of Borrego Solar, says such sites have a specific set of characteristics that affect the design, construction and economics of a solar project.

Like a Superfund site, a capped landfill has a layered structure. The trash at the bottom is covered by clay or sand, over which is placed a geomembrane – plastic sheeting that acts as a water barrier. On top of the geomembrane goes a couple of feet of soil and finally a vegetative layer – otherwise known as grass.

Rule number one with capped landfill sites is that the construction cannot penetrate the geomembrane. A compromised geomembrane not only risks releasing toxic chemicals into the surrounding environment, but it also causes the area to stink.

Thus, a solar array on a capped landfill will necessarily be ballasted because no piles can be driven through the membrane. Harrison points out that this requirement adds at least 20% to the cost of the mounting and racking infrastructure. Hanwha's Underwood says ballasting can add as much as 30% to the cost of labor and materials.

Another consideration is that no electrical trenches can be dug, which imposes additional costs in the form of above-ground conduits and labor. In the case of Superfund sites, trenches run the risk of disturbing soil and releasing contaminants. At landfills, trenches risk compromising the cap.

Finally, all of the vehicles operating on a capped landfill have to be tracked because treads distribute weight more evenly than wheeled equipment. This means no trucks.

Borrego Solar has started construction on a 2.7 MW solar project on a landfill site in Coventry, Vt., owned by Casella Waste Systems. Casella initiated the project with a successful application under Vermont's feed-in tariff program. Borrego partnered with Soltage Greenwood, a joint venture between Greenwood Energy and Soltage LLC, to acquire the project from Casella in November 2013.

The finished ground-mount solar facility will sell power to Vermont utilities according to a proportional formula developed by the Vermont Public Service Board for the state's Sustainably Priced Energy Development program.

The Coventry site features an active landfill – the only one in the state – a capped section and a buffer region. The solar project is proceeding in the buffer zone, located between the landfill and the southern reaches of Lake Memphremagog, which straddles the U.S.-Canadian border. Also onsite is an existing 8 MW gas-to-energy generating facility fueled with methane captured from the active and capped sections of the landfill.

Because the solar array at the Coventry site is being constructed in a buffer area adjacent to the landfill, Harrison says Borrego was free to go with a traditional pile-secured ground-mount design from RBI Solar. The racking will support 9,018 Yingli 300 W panels. SMA is supplying three 720 kW Sunny Central inverters for the project.

According to Harrison, the Coventry project was blessed by several factors, not the least of which was the encouragement of the state. Also, the existence of a biomass plant on the site simplified grid interconnection issues because the infrastructure was already in place. The Coventry solar installation will connect at 34 kV as a wholesale distributed generation project.

For its Superfund site project, Hanwha received first-stage approval from the EPA in June 2013, and the project was substantially completed by the end of the year. By March 2014, the project had reached commercial operation, using polycrystalline modules engineered by Hanwha Q Cells in Germany.

Looking back, Underwood recalls that ‘many times, the project could have died an early death but didn't.’

For Underwood, the Maywood project proved that solar development on brownfield sites could work. In fact, Underwoood says he's currently looking at more than 25 solar projects around the country that could fit the bill.

‘There are a number of pathways that [solar development of brownfield projects] becomes its own market,’ he explains. For starters, he says, utilities must have easily understood incentive programs in place, because such clarity is helpful when it comes to working with financial partners.

The other determiner, he says, comes from state policy. He equates recent solar legislation passed in New Jersey and Massachusetts as missed opportunities. He says the New Jersey Board of Public Utilities could have implemented a price adder to incent solar development in the New Jersey – which has the largest concentration of brownfield sites in the U.S. – but decided against it.

Equally disappointing, he says, was Massachusetts' SREC II program, which designated that solar development on brownfield sites would receive 80% of the value of the SREC, making the incentive less impactful than, say, rooftop or canopy solar development.

Until states fully commit to such a program, solar development on brownfield sites is the exception, rather than the norm.

‘With solar competing directly with natural gas in select markets,’ Underwood says, ‘and the proven ability to complete a renewable energy project on a Superfund site without subsidies, states and utilities have the unique opportunity to bring about environmental site reuse within existing renewable energy programs – and achieve a durable, dual public-private benefit.’

Editor's note: An earlier version of this story incorrectly identified the Maywood Solar Farm in Indianapolis as the first solar project developed on a Superfund site. The story has been updated to correct the error.