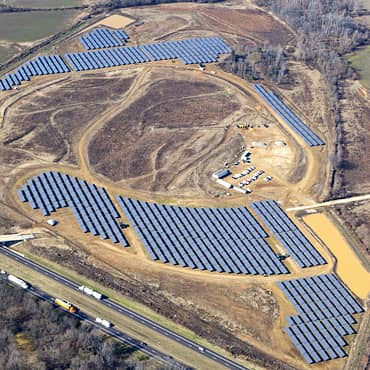 Tennessee's solar value chain has quietly – but rapidly – expanded over the past few years, sending the state into the ranks of the U.S.' most important states for solar manufacturing. A recent report from the Tennessee Solar Institute (TSI) confirms and quantifies this growth, while acknowledging the work that remains to be done.

‘Tennessee is one of the top markets for solar energy manufacturing in the U.S.,’ stated Tom Kimbis, vice president of strategy and external affairs for SEIA, when the partnership was announced.

TSI, a Center of Excellence at the University of Tennessee and Oak Ridge National Laboratory, was launched in 2010 as part of Tennessee's Volunteer State Solar Initiative. The organization assessed exactly how much solar manufacturing – and other solar business – is taking place in the state.

By TSI's count, more than 200 for-profit and nonprofit entities in the solar value chain call Tennessee home. These firms comprise a mix of small businesses and established, diversified companies – many of which have seen solar manufacturing contribute an increasingly large percentage of their business or replace other business lines.

For instance, Sharp Manufacturing Co. of America, which previously manufactured televisions and microwaves at its Memphis factory, shifted to PV module assembly work in 2000. According to TSI, the company now employs 400 people and completed its 2 millionth module in 2010.

On the opposite end of the spectrum, 58% of Tennessee's solar businesses employ fewer than 25 employees, and 78% have 100 or fewer employees. Many of these small shops operate in the installation market.

‘Installation is the largest sector in the value chain, with 29 percent of responding businesses,’ the report states. ‘It is followed by services, education and training at 17 percent. Of the firms that responded, 53 percent are in multiple sectors of the solar value chain [and] 39% have manufacturing operations in Tennessee (not necessarily solar sector operations).’

As is the case in any state, especially in a difficult economic environment, Tennessee must overcome several specific obstacles in order to continue to attract and retain solar companies.

‘If Tennessee does not capitalize on its advantages, the state's economy risks losing jobs and business opportunities to neighboring states, which are also growing their solar sectors,’ the report warns.

Similarly, a high percentage of solar firms in Tennessee are ‘seeking the establishment of standard quality management metrics and risk management policies for solar products.’

For manufacturers specifically, technical assistance for new entrants will be important, and a full 63% of respondents said that employee training is a ‘significant issue’ in the solar sector.

According to the report, development needs range from leadership training to equipment maintenance to pilot demonstration to inventory management. Companies adapting existing factories to manufacture solar components may require specialized assistance in modifying their processes and production lines.

Overall, TSI says that site visits with manufacturers and survey responses from installers and distributors have revealed several priorities for the state's solar development, but work remains to be done. The next phase of research will focus on ‘understanding current capacity and demand for solar products, and identifying bottlenecks and issues which must be addressed to facilitate growth in Tennessee's solar value chain,’ the organization says.

Concurrently, the PV installation market in Tennessee has taken off. The statewide total of installed PV grew from less than 1.3 kW in 2008 to approximately 17 MW at the end of 2011, according to the report. Cumulative capacity is projected to exceed 23 MW by the end of this year.