Home Solar News The Evolving Solar PV Landscape: The Changes That Lie Ahead 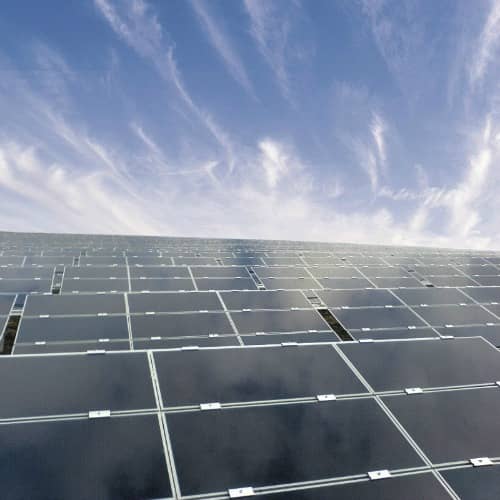 Demand for solar PV energy in the U.S. continues to gain considerable traction. During 2011, installed PV capacity reached the 2 GW level, with 880 MW allocated to the commercial sector and 760 MW to the utility segment.

However, this growth has not been realized without certain challenges. Indeed, often years of negotiation take place prior to any project's completion. Issues typically focus on where and how to host the array, what size it should be, what products to use, who will purchase the electricity generated and how the entire project should be funded.

Over the next few years, utility-scale PV installations in the U.S. are set to grow substantially. In fact, over 24 GW of these projects are currently in the planning stages. Some have already assigned system developers and issued contracts, while others are currently in the"at-risk," category, as they are still awaiting power purchase agreements or project financing.

It is likely that federal and state policies will ultimately dictate which locations are targeted most by PV developers. Although every state in the U.S. now boasts some level of commercial or utility PV capacity, California and New Jersey continue to dominate PV projects installed in the U.S.

In recent years, California's contribution to planned or installed PV projects reached 80% of national demand. However, when all PV projects in the pipeline over the period from 2010 to 2015 are considered, California's share may decline to below 30%. 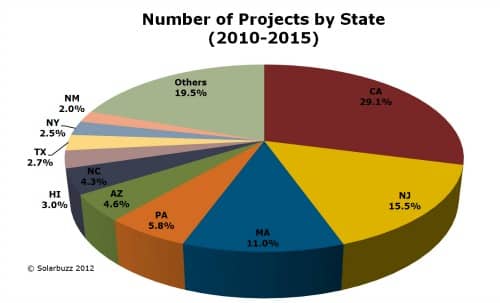 Another interesting trend is that nearly 30% of all planned or installed PV projects in the U.S. now fall into the 1 MW to 5 MW category. In North Carolina, the PV landscape has been changing recently from PV installations at the 1 MW level to include several larger planned projects at the 5 MW level.

However, the U.S.' increase in megawatt-scale PV deployment does not always command widespread support. In fact, several planned installations have recently been met with opposition from the general public, local councils or environmental groups.

Often, the use of land with a historical or cultural significance – or land fit for agriculture or other use – can provoke conflict and even legal challenges. This often forces the different parties into reaching a workable compromise, but can, under certain circumstances, result in the full withdrawal of the planned PV project. 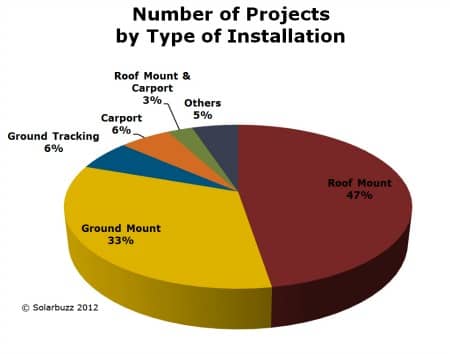 Market segments
PV market segmentation remains highly diverse across the U.S. – unlike in some European countries, which are starting to impose restrictions on large megawatt-scale installations in favor of roof-mounted PV.

In the U.S, there remain many viable options for where to host PV arrays. Although ground-mounted PV installations hold most of the capacity in the U.S, rooftop installations still account for almost half of the planned or installed U.S. PV projects.

Large retailers are making significant commitments to install PV on their warehouses, stores and distribution centers. This style of installation often uses otherwise-wasted space and has the upside potential of bringing new employment opportunities to local installers.

In fact, despite the large investment levels typically involved, these types of retailers are often more likely to obtain bank financing for a PV installation project than small business owners. Small businesses, school districts and municipalities tend to welcome third-party ownership of their PV array through roof or land leases. These can provide benefits to the array host without the initial financial outlay.

Finally, in areas where suitable locations for PV projects may be more difficult to find, new options are appearing.

One such example involves floating PV arrays, which are suspended on a body of water. This style of installation is particularly attractive in regions where land space is highly valued as a commodity, such as on vineyards.

Another example is portable arrays that begin their life as ground-mounted but are later relocated onto a rooftop or moved to another site altogether. Building-integrated options are also being increasingly considered, as are capped landfills.

Additionally, some PV carport installations are over 1 MW in size and constructed on parking garages, while others are used in parking lots, car dealerships, schools and walkways to protect vehicles and people from the elements. They can also include charging facilities for electric cars.

Christine Beadle is an analyst at market research firm NPD Solarbuzz. She leads research efforts for the United States Deal Tracker and contributes to a comprehensive database resource for all PV projects throughout the U.S. Beadle can be contacted at cb@solarbuzz.com.