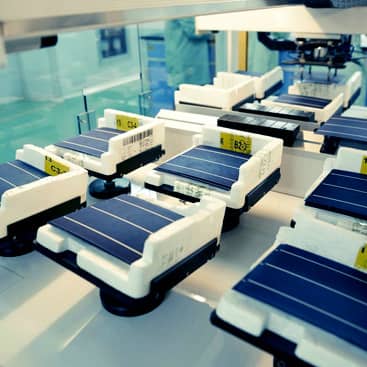 Earlier this week, NPD Solarbuzz announced that the PV production equipment book-to-bill ratio had hit negative territory. But could right now – in the midst of module oversupply, idle factories and company bankruptcies – actually be the perfect time for manufacturers to take the plunge and upgrade their equipment?

A recent report from Lux Research makes the case for manufacturing equipment investment during the downturn. In fact, those purchases could enable solar manufacturers to survive.

We spoke with Fatima Toor, an analyst at Lux Research and lead author of the report – titled ‘Turning Lemons into Lemonade: Opportunities in the Turbulent Photovoltaic Equipment Market’ – about the types of innovations and improvements that could separate the winners from the losers in the current shakeout.

Solar Industry: A recent report from another firm predicted that PV equipment spending would decline 66% overall this year and remain extremely low next year. Do you also expect this severity of a downturn, or will manufacturers' need to upgrade equipment override other factors?

Toor: We certainly expect a downturn in the PV equipment industry this year – hence the title of our report, ‘Turning Lemons into Lemonadeâ�¦’ But there are still opportunities for equipment manufacturers given that equipment is the backbone of the PV industry and product differentiation is needed to make profits. So, factors that will drive equipment sales include the following:

Solar Industry: What is the forecasted timetable for equipment upgrades? Should manufacturers be buying new production equipment now?

Toor: Given low capacity utilization globally, there is significant idle capacity in the market. Contrary to the general consensus, idle capacity is an opportunity for PV manufacturers to upgrade to high-performance products, assuming available cash.

Current low capacity utilization in the PV industry should and will trigger equipment upgrades across the entire value chain starting from high-purity polysilicon production upgrades to upgrades for high-efficiency cell and module designs.

These upgrades will grow demand for differentiated PV equipment, enabling the long-term survival of innovative PV industry manufacturers and the equipment providers that help them to [survive]. Those that sit idle while their equipment idles are sealing their fate.

There are already PV manufacturers that are upgrading their lines. One example is Trina's use of [Applied Materials'] double printing tool that improves cell efficiencies while reducing the cost of cell metallization.

Another example is GCL's upgrade of its idle polysilicon plants to 10N Siemens material and its introduction of fluidized bed reactor polysilicon that has significantly lower electricity costs than the Siemens process – but has challenges to overcome to get to high Ns. So, there is already activity around equipment upgrades in the industry.

Solar Industry: Your report says that opportunities for c-Si process improvements are ‘glaringly obvious.’ What are a few specific examples of improvements manufacturers have not made?

Technologies such as quasimonocrystalline silicon (qc-Si), epitaxial silicon, and high-efficiency cell designs are all improvements that the manufacturers are making right now.

I recently spoke with ReneSola, a Chinese wafer manufacturer that has converted 100% of its capacity to qc-Si, which required a custom furnace design. Solexel just announced a 20.62% efficient epitaxial cell, with an area of 156 mm by 156 mm.

Solexel has strategic partnerships with SunPower and Owens Corning, and it claims to be able to reach module costs of $0.42/W at scale. With its high-efficiency product, it should be able to sell at very healthy margins.

In addition, all the tier-one manufacturers have high-efficiency products: Suntech (Pluto), Yingli (PANDA), Trina (Honey) and Canadian Solar (ELPS). These companies are conducting in-house research and development to improve the efficiencies even more, and this activity will drive equipment upgrades when technologies move from lab to production.

Solar Industry: Thin film – especially the copper indium gallium selenide (CIGS) sector – has taken a hit lately. How many of these manufacturers do you think will survive? How will they be differentiating themselves?

Toor: There is going to be consolidation in the CIGS sector, and this is a trend we reported in our CIGS report last year. One example of consolidation is Hanergy's acquisition of Solibro and Miasole.

We think the likely survivors are going to be few but big. Some of those will include Avancis-Saint Gobain and Avancis-Hyundai Heavy Industries, TSMC, Solar Frontier and Hanergy. The differentiation will again be high efficiencies.

For example, Solar Frontier recently reported [the development of] a sub-module of 30 cm by 30 cm that had an efficiency of 17.8% – which is impressive for CIGS and makes it competitive to x-Si.