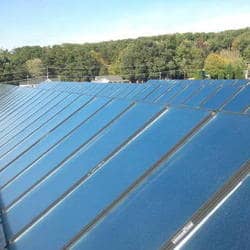 With only five solar thermal testing laboratories currently accredited by the Solar Rating and Certification Corp. (SRCC), the backlog of products awaiting certification is staggering. In turn, delays have rippled throughout the entire solar thermal supply chain, stalling project development.

However, two universities are seeking to change that. Raleigh, N.C.-based North Carolina State University (NCSU) and West Haven, Conn.-based University of New Haven (UNH) are both in the process of developing accredited solar thermal testing facilities, which would bring the total number of accredited labs to seven.

NCSU's initiative will involve the expansion of its North Carolina Solar Center, which already serves as a solar thermal testing facility but is in the process of becoming an SRCC-accredited lab. The project received a $100,000 grant from the North Carolina Department of Commerce's Green Business Fund in 2009, and the initiative was launched shortly thereafter.

UNH began developing its Solar Testing and Training Laboratory last fall, after being approved for a $500,000 grant from the U.S. Department of Energy and a $100,000 grant from the Connecticut Clean Energy Fund. But before the lab can officially begin testing, it must undergo a lengthy and involved accreditation process, Tommy Cleveland, solar testing and training laboratory manager at UNH, tells Solar Industry.

‘We're basically starting the whole [project] from scratch, so we're utilizing engineering students here to design all of the equipment and test systems that will be necessary to actually conduct the SRCC OG-100 tests,’ he explains.

In the first phase of the project, senior engineering students at UNH will design and validate the automated testing systems that will be used at the facility. Then, once the lab is accredited, students will perform fee-for-service testing of solar thermal products. According to Cleveland, UNH expects to begin validating the student-designed equipment this April and to finish the SRCC accreditation process by this time next year.

There is no doubt that the need for new testing facilities is pressing. Solar development is heavily dependent upon financial incentives such as the federal investment tax credit, and in order for projects to receive these benefits, the products used must be SRCC-certified, Cleveland notes.

In fact, the current shortage of accredited testing facilities is crippling the entire solar thermal supply chain. For instance, some installers are waiting for manufacturers to introduce new collectors to the market, but because of the certification backlog, there is ‘no end in sight as far as when that's actually going to happen,’ Cleveland adds.

Despite the perpetual waiting game that has permeated every link in the supply chain, Cleveland is optimistic that the addition of UNH's new testing facility, in combination with the accreditation of North Carolina State University's lab, will go far toward removing these barriers to development.

Photo: This solar thermal installation at Acme-McCrary in Asheboro, N.C., was installed by FLS Energy and inaugurated in January. Photo courtesy of FLS Energy.