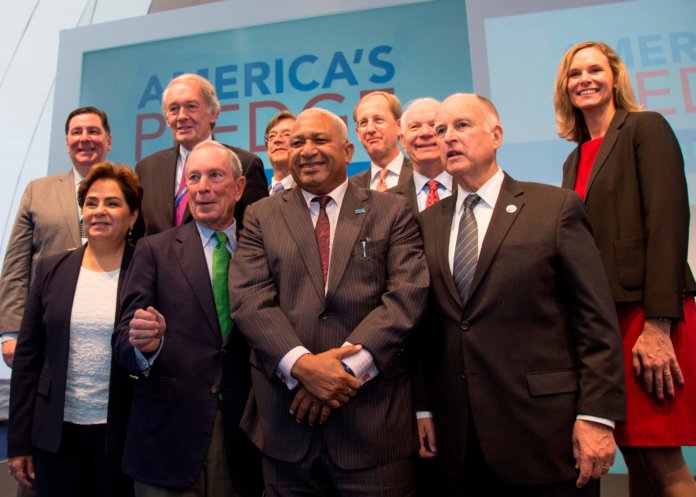 Although the Trump administration’s decision to withdraw from the Paris Agreement has left the U.S. as the only country in the world uncommitted to the global accord, U.S. state and local leaders are taking the reins from the federal government and remain determined to fight climate change.

At the United Nations Climate Change Conference (COP23) on Saturday, California Gov. Jerry Brown, the conference’s Special Advisor for States and Regions, joined Michael R. Bloomberg, the U.N. Secretary-General’s Special Envoy for Cities and Climate Change, to reaffirm the commitment of U.S. states, cities and businesses to the Paris Agreement. Brown also later welcomed Virginia to the Under2 Coalition at a signing ceremony with Gov. Terry McAuliffe.

“When cities and states combine together and then join with powerful corporations, that’s how we get stuff done,” said Brown at the U.S. Climate Action Pavilion, a purpose-built exhibition space sponsored by U.S. non-federal leaders at COP23 in Bonne, Germany. “We’re here, we’re in and we’re not going away.”

In July, Brown and Bloomberg partnered to launch America’s Pledge on climate change, and on Saturday, the co-chairs released a report touted as the first communication to the international community specifically addressing the scope and scale of non-federal climate action in the U.S. It captures and quantifies the outpouring of public support for the Paris Agreement since Trump’s withdrawal announcement, finding that cities, states and businesses representing more than half the U.S. economy and population have declared their support for the accord, including more than 2,300 signatories to the “We Are Still In” declaration.

If these non-federal actors were a country, their economy would be the third largest in the world, bigger than all but two national parties to the Paris Agreement, according to the report. In addition, the report finds that a total of 20 U.S. states, 110 U.S. cities, and over 1,400 businesses with U.S. operations representing $25 trillion in market capitalization and nearly 1.0 gigatons of GHG emissions per year have adopted quantified emissions reduction targets. The most ambitious of these targets, such as those adopted by California, mirror the nationally determined contributions (NDCs) of national governments.

The America’s Pledge report examines current and potential future opportunities for non-federal actors in the U.S. to deepen and strengthen their role in meeting the U.S. commitment under the Paris Agreement to reduce emissions by 26% to 28% below 2005 levels by 2025. As part of the America’s Pledge initiative, a range of non-federal leaders are stepping up to coordinate more closely with each other and international partners to help meet America’s Pledge.

“The group of American cities, states, and businesses who remain committed to the Paris Agreement represents a bigger economy than any nation outside the U.S. and China,” said Bloomberg. “Together, they are helping deliver on the promise of the agreement and ensuring the U.S. remains a global leader in the fight against climate change. In Paris, the U.S. pledged to measure and report our progress reducing emissions alongside every other nation. Through America’s Pledge, we’re doing just that, and we’re going to continue to uphold our end of the deal, with or without Washington.”

“If the challenge of climate change is to be solved and the opportunities of a low-carbon transition harvested, we need all sectors of society in all nations fully on board,” said the UNFCCC’S Espinosa. “Cities, states, regions and territories have, along with business and civil society, been an inspiration before, during, at and following Paris.”

Later on Saturday, Brown also joined Virginia Gov. McAuliffe at an Under2 Coalition signing ceremony. With the addition of Virginia, the Under2 Coalition now includes 189 cities, states and countries collectively representing more than 1.2 billion people and $29.4 trillion GDP – equivalent to over 16% of the global population and 39% of the global economy.

“Virginia is driving clean energy investment and carbon reduction despite the president’s decision to withdraw from the Paris Climate Agreement,” said McAuliffe. “In the absence of leadership in Washington, Virginia is stepping up to sign the Under2 Memorandum of Understanding. Virginia will meet the challenge of climate change head on, and we will do so in a way that grows our clean energy sector and supports our new Virginia economy.”

Members of the coalition, formed in 2015 ahead of COP21, pledge to limit greenhouse-gas emissions to 2 tons per capita or 80% to 95% below 1990 levels by 2050, as well as to support the Paris Agreement’s goal of keeping the increase in global average temperature to below 2 degrees C.

The signing ceremony followed a meeting organized by The Climate Group – the Secretariat of the Under2 Coalition – featuring leaders representing dozens of member governments.

“It is great to see another U.S. state ready and willing to reduce their greenhouse-gas emissions by committing to the Under2 Coalition,” said The Climate Group CEO Helen Clarkson. “This is another example of the strong leadership on climate action that we’ve seen from U.S. states over the past few months, despite the position of the federal government. We hope that more sub-national governments around the world take up such ambitious climate action.”