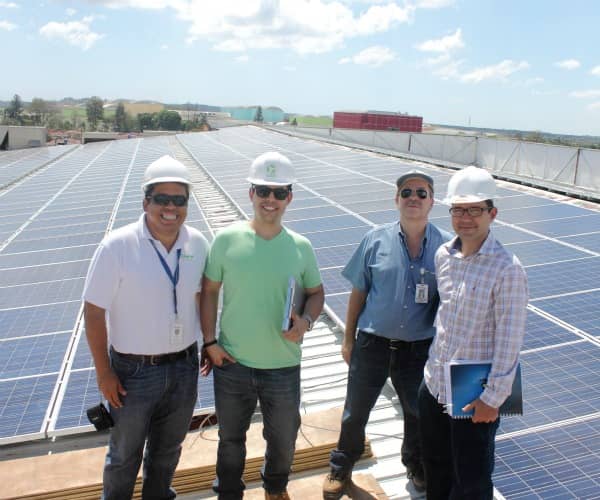 New York-based-UGE International – formerly Urban Green Energy (UGE) – and its Panama-based partner OTEPI Renewables have unveiled the fist half dozen of an expected portfolio of 22 commercial-scale solar photovoltaic installations, with a total capacity of 4.5 MW, for Cochez y Cia SA, a chain of retail home improvement stores with locations throughout Panama.

The installations represent a significant investment in Panama for UGE, which had completed its first solar project in the country last year, also in partnership with OTEPI and Cochez. Nick Blitterswyk, CEO of UGE, says the move into Panama is the result of a careful analysis of the local market conditions, as well as the cultivation of relationships with local partners and customers.

On the market side, Panama satisfies what Blitterswyk describes as the ‘Goldilocks formula’ for successful solar project development in the commercial and industrial (C&I) space, which is UGE's primary area of focus. Elements of this formula include satisfactorily high electricity prices at which solar can compete at the retail level; an overall economic infrastructure wherein projects can be installed cost-effectively; a business-friendly climate in which the developer has confidence a deal closed will go forward; and a banking structure favorable to financing such projects – and, it doesn't hurt that Panama uses the U.S. dollar.

‘This mix of factors has led Panama to become a key market for us,’ Blitterswyk says. ‘It's a little bit trickier in some of the other markets in the region.’

Partnerships are sometimes a matter of being in the right place at the right time. Last year, OTEPI, a firm specializing in engineering, procurement and construction work, approached UGE for assistance in closing a deal with Cochez to build a 190 kW rooftop array for one of the company's locations in Panama City. UGE provided sales, procurement and financing services to bring the project off.

Blitterswyk says the experience of working with OTEPI and Cochez on the 2014 installation led directly to the significantly more ambitious program this year. ‘From doing that first project with Cochez, we were able to sell them in January on the idea of doing a full portfolio of 22 sites,’ he says. ‘The economics were so compelling, and the first project had gone so well. It was very much a repeat customer sort of relationship.’

At the same time, UGE and OTEPI have worked to win over other customers – yet to be announced – throughout Panama. Those other deals will increase the number of projects the partners have embarked on this year to nearly 30. The rapid expansion has required significant investments in talent and material, but Bitterswyk says the economies of scale and competitiveness of solar in Panama make such expansion worthwhile.

This is not to say the expansion is not without its risks. Panama generates a significant portion of its electricity from oil, and the recent drop in oil prices is cause for some concern. Until this year, the average over the last 15 years was a 4.3% annual increase in the price of electricity. ‘It's easier to sell solar when everyone is expecting another such increase than when people are expecting a decrease,’ Blitterswyk says.

On the other hand, transmission and distribution charges are high enough that he says the price of oil could drop to zero, and distributed-generation solar would be a pretty good deal for C&I customers. What would be even better is if Panama would lift its 500 kW net-metering cap.

‘On the one side, net metering is allowed,’ Blitterswyk says. ‘On the other, it could be higher, right?’