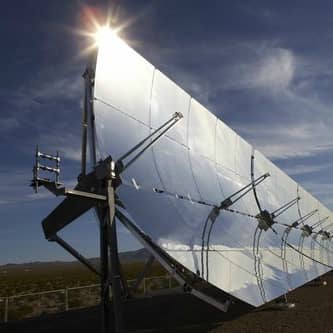 The U.S. Department of Energy (DOE) hopes the $10 million it awarded the Sacramento Municipal Utility District to develop a hybrid concentrating solar power (CSP) and gas-fired power plant could serve as a model for such hybrids all across the U.S.

Minh Le, solar energy technologies program manager of the DOE's Office of Energy Efficiency and Renewable Energy, says between 11-21 GW of CSP can be integrated with existing power plants in the U.S.

‘Connecting CSP to the pool of existing fossil plants represents a tremendous opportunity,’ he says.

Moreover, the DOE believes CSP cogeneration technology represents a great export opportunity for U.S. companies. The DOE promotes the notion of CSP cogeneration, both in the U.S. and internationally.

The idea of cogeneration based on solar power is not new. In November 2010, Florida Power & Light Co. fired up its Martin Next Generation Solar Energy Center – a 75 MW parabolic-trough CSP system colocated with an existing 3.7 GW combined-cycle natural gas power plant. The solar portion, which incorporates over 190,000 mirrors, pipes steam into the turbines of the gas plant, saving on fuel.

The scale of the Sacramento project is much more modest. The CSP portion is currently planned at 10 MW and will be colocated with the existing 500 MW Cosumnes gas-fired power plant. Technologically, however, SMUD's facility will be a leap forward in that the CSP portion will operate at much higher temperatures. According to Le, the CSP portion will contribute direct, high-pressure steam at about 550 degrees C.

‘CSP and fossil have never been put together in this fashion before,’ he says. Integration of high-pressure steam feeds from CSP plants into the turbines of existing fossil plants is a challenge from a design and engineering perspective. ‘The work we are funding is innovative but based on sound scientific and engineering principles.’

Large-scale CSP plants are coming online in the U.S. and elsewhere. Many others are under development. The vast majority of these are stand-alone facilities, providing power to the grid just like any other AC-generating asset. Le says the purpose of the SMUD award is to develop small-scale CSP as an augmentation technology for existing fossil plants.

Unlike stand-alone CSP facilities, which are typically located in remote areas such as deserts, cogeneration CSP would have to be shoehorned into locations with existing plants, many of which are located in populated areas where space is at a premium. In each case, the CSP portion might provide an average of 5%-10% of the steam for the cogeneration facility. Nevertheless, this would produce a commensurate reduction in the amount of fossil fuels consumed.

An important feature of the Sacramento project is the integration of thermal energy storage into the cogeneration facility. The fluids or slurries heated by concentrating mirrors remain capable of producing steam and, thus, electricity for hours after the sun sets or is occluded. In addition, Le says, solar thermal storage acts as a buffer, enabling operators to decouple the CSP portion from the system.

As the award recipient, SMUD will have the responsibility for all procurement activities and will be doing its own solicitations for vendors and suppliers on the project. At the same time, the DOE will be performing technical reviews during the design phase, both to better understand the process and provide whatever assistance it can.

Le says the DOE will also remain involved in the project in order to develop seasonal and daily operating profiles of the facility that could be an important factor in developing successful projects elsewhere.

‘The DOE's goal is to catalyze the industry,’ Le says. ‘We also want it to be financially viable.’