The U.S. has installed 1,354 MW of solar photovoltaic power systems in the third quarter of this year (Q3'14), up 41% over the same period last year, says new analysis from GTM Research and the Solar Energy Industries Association (SEIA).

According to the report, Q3'14 was the nation's second-largest quarter for PV installations and brings the cumulative U.S. solar PV capacity to 16.1 GW, with another 1.4 GW of concentrating solar power capacity. Through the first three quarters of the year, solar represents 36% of new electricity generation capacity to come online, up from 29% in 2013 and 9.6% in 2012.

Many industry observers expect a significant downturn in utility- and large-scale solar installations with the expiration of the federal ITC at the end of 2016. It is an open question whether growth in other market segments will be able to compensate for the anticipated drop-off after the ITC expires in terms of maintaining an overall trend in U.S. PV growth.

More information about the ‘U.S. Solar Market Insight’ report can be found here. 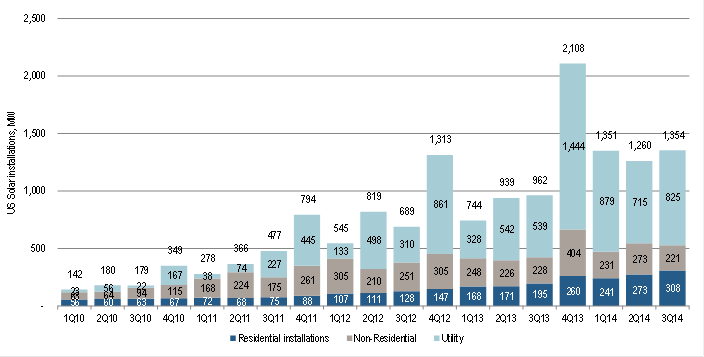