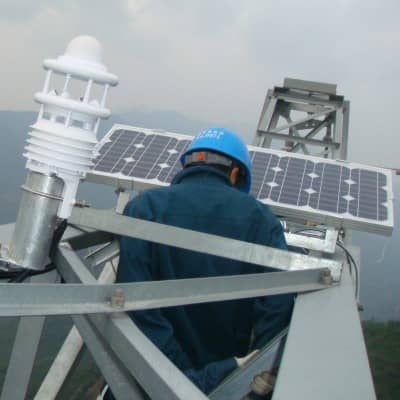 The 265 MW Imperial Valley Solar 1 – also known as Mount Signal Solar – is a showcase of solar technologies, including thin-film photovoltaic modules from First Solar and trackers from Array Technologies. The facility is also receiving weather stations that are expected to calculate its operating efficiency and help operators better meet grid demands.

Folsom, Calif.-based Trimark Associates has been contracted to provide the monitoring and communications functions for the plant. The company has selected Lufft USA to supply the weather stations that will gather the required real-time meteorological data.

‘Weather data is nice to have,’ Pattison says. ‘State regulations in California say that weather stations must be a part of large solar projects in order to monitor the health and efficiency of the facility.’

The purpose of the regulations, Pattison says, is to enable solar plant operators to report the precise conditions under which electricity is being produced.

Accurate, real-time weather monitoring and forecasting enables public utilities such as San Diego Gas & Electric (SDG&E), the utility receiving the electricity from Imperial Valley, to more accurately predict the availability of energy on the grid from renewable sources to avoid power shortages and ensure more efficient management of electricity and other energy resources.

‘A unique aspect of Imperial Valley Solar 1 is that the site network was not built to accommodate metrological stations,’ says Robert Hinchman, regional director of Trimark Associates, in a statement. ‘Instead of trenching and installing fiber-optic cable between the control room and the stations, we recommended that the client connect the instruments with [Trimark's] Remote Intelligent Gateway via a secure radio frequency. This approach allows us to transmit to CAISO the data they require on generation and weather conditions while minimizing construction costs.’

Silver Ridge Power is developing Imperial Valley Solar 1, with Abengoa providing engineering, procurement and construction services. The storied project has had a number of owners and incarnations over the years. SDG&E will buy the electricity from the plant under a 25-year power purchase agreement. Last October, Google invested $103 million in the project, which is scheduled to go online this year.