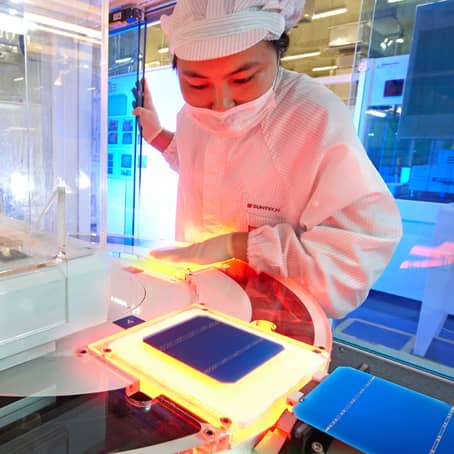 All scores are based on manufacturers' responses to a survey from SVTC. Although 40 firms were asked to participate, only 15 responded – perhaps a telling survey finding in itself when a primary emphasis is on transparency and accountability.

Overall, Germany-based crystalline PV module manufacturer SolarWorld took the No. 1 spot, with an overall score of 91 out of 100. The company received top marks for product takeback and recycling, as well as for supply chain and green jobs.

In its survey responses, SolarWorld garnered points for such environmentally friendly actions as sending its returned modules to a third-party recycling facility, prohibiting the export of end-of-life modules from developed countries to developing countries, and conducting audits to monitor its supply chain for environmental and health issues. The company also stated that its does not use prison labor for production or recycling.

SolarWorld lost several points in SVTC's chemical-use and lifecycle-analysis category for using lead in its products. The company was far from the only lead-user; SVTC found that only two of 15 respondents manufacture modules that are free of both lead and cadmium – two notoriously toxic materials closely associated with PV manufacturing.

More encouragingly, the report found that all five of the manufacturers that have undergone the U.S. Environmental Protection Agency's Toxicity Characteristic Leaching Procedure passed the test. However, of the three manufacturers that took a comparable California test, one failed both of the test's portions, and the remaining two each failed one portion.

Behind SolarWorld, China-headquartered Trina Solar placed second in the manufacturer rankings, with a score of 89. The company was followed by Norway-based REC, Arizona-based First Solar and Colorado-based Abound Solar, which each earned a score of 87. SunPower (85 points), Solon (84), Sovello (83), Calyxo (82) and Yingli Solar (72) rounded out the top 10.

SVTC believes that based on the results of the scorecard, the industry still has time to establish a less toxic manufacturing and disposal footprint to complement PV's green electricity production. Based on the historical path of the electronics industry, however, that window of opportunity will soon be closing.

‘The solar PV industry's rapid growth makes it critical to focus on industry innovation on reducing toxic materials use and on developing products that are easier and safer to recycle,’ the organization says. SVTC also called for the industry to build domestic recycling infrastructure that adheres to proximity principles.

The full Solar Scorecard, with sortable rankings and full survey responses from manufacturers, is available from SVTC here.

Photo: A worker at a Suntech manufacturing facility in China. (Suntech did not complete SVTC's survey and thus received a score of 0 in the report.) Photo credit: Suntech.