Home Solar News Will 2013 Be The Year Of Turnaround For The Solar Supply Chain? 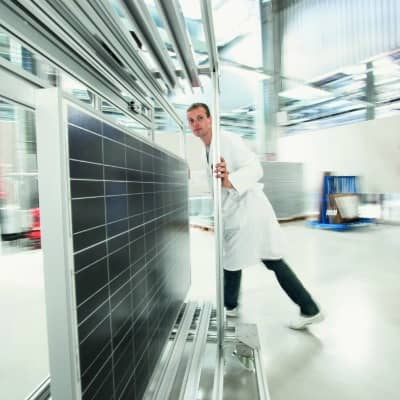 After a disastrous third quarter of 2012, which was characterized by extremely low factory utilization rates across the entire photovoltaic supply chain, the industry saw a surge in demand for PV modules in the final quarter of the year.

A new PV module shipment record of 11 GW was reached, according to the IHS Solar Integrated Market Tracker from information and analytics provider IHS. But despite this positive sign, the situation of the global PV industry remains critical, and a substantial recovery of the supply-demand balance is not expected to occur before the second half of this year.

The third quarter of 2012 dealt a blow to the global photovoltaic industry, IHS says. After a relatively strong second quarter resulting in global installations of 7.8 GW, markets softened again.

‘Installations in the third quarter amounted to just 7.5 GW,’ says Stefan de Haan, principal analyst at IHS. ‘Wholesalers, [contractors] and PV suppliers were forced to carefully control their inventory levels due to falling prices and low shipment levels, and production cuts were the consequence.’

In parallel, prices continued their slide, resulting in module industry revenues of only $6 billion – the lowest value since the second quarter of 2009. These difficult conditions were reflected in an increasing number of suppliers exiting the market.

‘In the fourth quarter of 2012, global PV markets rebounded sharply,’ de Haan notes. ‘Very strong demand from Asia, with the surge driven largely by China and Japan, helped to compensate for sluggish demand in Europe.

‘IHS estimates that global PV installations were 10.1 GW in the fourth quarter of 2012,’ he continues. ‘In particular, leading Chinese module suppliers benefited from the uptick in demand and shipped much more than previously expected.’

In total, 11 GW of global module shipments are estimated for the fourth quarter of 2012 – a new record for the industry. As anticipated by IHS, average market pricing for crystalline modules declined to $0.65/W at the end of 2012 – down from $0.70/W at the end of September.

Importantly, however, the price decline lost momentum in the course of the fourth quarter, the report adds. Toward the end of the year, some module prices even increased. Record-level shipments paired with stabilizing prices drove a profound recovery of revenues. Fourth-quarter 2012 module revenues grew by a stunning 42% quarter-over-quarter, reaching $8.5 billion.

In the first quarter of 2013, suppliers are predicted to experience the usual seasonal weakness of global solar markets, IHS says. Global PV installations are forecast to drop to 6.7 GW in this quarter. As a result, upstream shipments and revenues will temporarily come under pressure again.

With prices forecast to decrease by another 4% to 5% in the first quarter of 2013 (compared to the fourth quarter of 2012), module revenues will fall back to the critical levels of the third quarter of 2012 – or even below. IHS expects that this development will force more suppliers to review their business models and eventually leave the solar market.

Later this year, after a tough first quarter, a substantial increase in global demand is forecast to drive increasing revenues and stabilizing prices in the second half of 2013. IHS forecasts 35 GW of global installations in 2013, up 10% over 2012.

Although this level of growth is lower than previous years, it will drive a continuous improvement of shipments and revenues in the polysilicon to module supply chain throughout 2013. Recent positive signals from authorities in several key markets, such as China and France, raise hopes for the recovery of the PV industry to happen even faster.

‘While it's too early to give the all-clear for the PV supplier industry, there is increasing indication that the year 2013 will mark the turnaround,’ de Haan says.