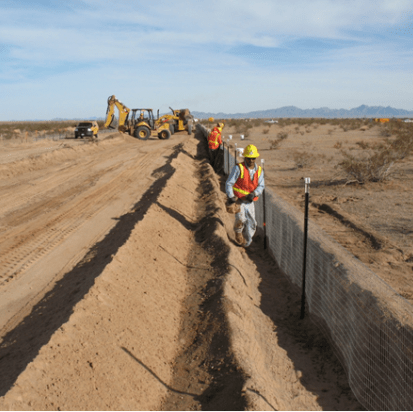 The 1 GW Blythe concentrating solar power (CSP) project, which is slated to be the world's largest solar facility when completed, has added another superlative to its credentials: On Tuesday, the project's developer, Solar Trust of America, was awarded the industry's largest-ever loan guarantee from the U.S. Department of Energy's (DOE) Loan Programs Office.

This $2.1 billion conditional guarantee from the DOE will support the first two units of the plant. Blythe, which will utilize proprietary air-cooled parabolic-trough CSP technology, is under development adjacent to the city of Blythe in Riverside County, Calif. Electricity output will be sold to Southern California Edison under a power purchase agreement.

‘By the time we're done, the Blythe solar power plant will generate more concentrating solar power than all the other CSP plants currently operating in the world combined,’ noted Uwe Schmidt, chairman and CEO of Solar Trust of America, during a conference call.

The DOE's support of this massive project represents its commitment to help the U.S. keep pace with other countries' deployment of renewable energy, added DOE Secretary Steven Chu.

‘Today, we're in a global race to develop and deploy clean energy technologies,’ he said during the call. ‘We either can sit on the sidelines and watch the competition pass us by, or we can get in the race and play to win.’

Gov. Jerry Brown, D-Calif., noted that Blythe will follow in the footsteps of several other large-scale solar installations in the state and is expected to help California reach its new renewable portfolio standard, which requires that utilities generate 33% of their electricity from renewable sources by 2020.

‘California has been in the lead [in deploying clean energy] for a very long time – going back more than 30 years,’ Brown said during the call. ‘This is another step in our journey to one-third renewable energy, and we think we're going to get to 40 percent very soon.’

The DOE's loan-guarantee program has been criticized by budget hawks and has narrowly escaped elimination several times, but according to proponents, the net economic effect on the U.S. when mammoth plants, such as Blythe, are constructed is solidly positive.

‘The sheer scale of Blythe will provide a significant economic impact throughout the country,’ Schmidt said. The construction of the plant's first two units, which is expected to cost $2.8 billion, will inject hundreds of millions of dollars into the unemployment-plagued local community and create 7,500 jobs in 10 states.

Struggling Midwestern steel plants, for instance, are scheduled to produce more steel for the project than is contained in the Golden Gate Bridge, he noted. The steel supply chain created will remain active over the next 10 years to support continued construction on Blythe, as well as future additional projects.

Commercial operation of Blythe's first 250 MW unit is targeted for the fourth quarter of 2013, according to a project fact sheet.