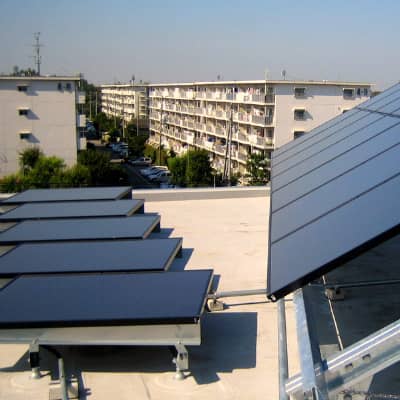 The Japanese photovoltaic market is set to grow by 120% this year, with more than 5 GW of new capacity expected, according to a new report from IMS Research (part of IHS Inc.).

Benefiting from the world's most attractive PV incentive policy, Japan's solar market is currently booming, with installations expected to exceed 1 GW in the first quarter alone, causing it to become the second largest market in 2013.

Japan's PV market currently benefits from a feed-in tariff (FIT) paying up to 42 yen/kWh, even though this rate is likely to be reduced by approximately 10% beginning April 1.

‘At 42 yen, Japan's FIT is by far the most attractive globally – overly generous, perhaps, which could lead to overheating of the market,’ explains Ash Sharma, senior director of solar research at IHS.

‘And while a 10 percent reduction in tariffs is widely expected by industry players, this will have little effect on both internal rates of return and market demand,’ Sharma continues. ‘Furthermore, many systems that have already applied for the higher FIT are able to benefit from this rate of 42 yen, even if they are installed after April 1.’

The report reveals that installations are estimated at over 1 GW in the first quarter of 2013 – the final quarter of Japan's fiscal year – and forecast to exceed 5 GW for the whole of 2013. This would see Japan leapfrog ahead of Germany, Italy and the U.S. to become the world's second largest PV market.

IHS Research found that domestic PV installations are proving to be a lifeline for struggling Japanese companies that are able to sell both modules and inverters at high margins, despite their competitiveness at an international level falling behind their overseas peers.

Providers of residential system kits; engineering, procurement and construction contractors; and project developers are also seemingly enjoying the high margins that come with a generous FIT and its resulting high system prices.

‘Residential system prices in Japan are roughly double than those installed in Germany,’ ssys Frank Xie, the report's co-author and a senior analyst for PV and solar research at IHS. ‘The ability to sell modules and inverters at significant premiums compared to the rest of the world, coupled with high demand and growth, provides a much-needed profit stream for Japanese suppliers.’

U.S. opportunities?
Although Japan has been reportedly attempting to attract foreign PV companies to its shores in order to help accelerate supply – and hence, installations – the report found that it remains a tough market for non-Japanese companies in which to compete.

‘While many Chinese and even U.S. module suppliers are now serving the Japanese market, they remain the minority and have largely needed to resort to original equipment manufacturer agreements and partnerships with Japanese manufacturers, despite being highly regarded brands in the rest of the world,’ Sharma says.

‘Simply put, Japanese customers want to buy Japanese modules,’ he continues. ‘Non-Japanese inverter companies have found it even harder to serve this market, as tough regulations from the certification board – JET – and even more stringent requirements from utilities have meant that substantial product redesigns are required before they are able to target this market effectively.

‘As a result, the market is currently suffering from a bottleneck in inverter supply,’ Sharma adds.

Projects more than 2 MW in size (considered ‘mega-solar’ in Japan) are a major driving force behind the country's triple-digit growth rate, but this trend is expected to be short-lived, according to the report. These projects will face a decline after 2013.

‘These so-called mega-solar projects are being deployed at a rapid rate, and we expect they will account for approximately 25 percent of total demand in 2013,’ Xie notes. ‘Government policy is in clear support of these projects, while the country grapples with severe energy shortages following its shunning of nuclear power.

‘However, this is likely to be short-lived and decline after 2014 once the current pipeline of approved projects is completed, largely because of a shortage of land in the country,’ he adds.

‘Another segment of the market that gets fewer headlines, but should not be neglected, is commercial rooftops,’ Sharma adds. ‘Systems in the range of 10 kW to 50 kW are in very high demand in Japan due to high incentives, high electricity prices, power shortages for commercial properties and relatively simple regulations for installations of this size.’