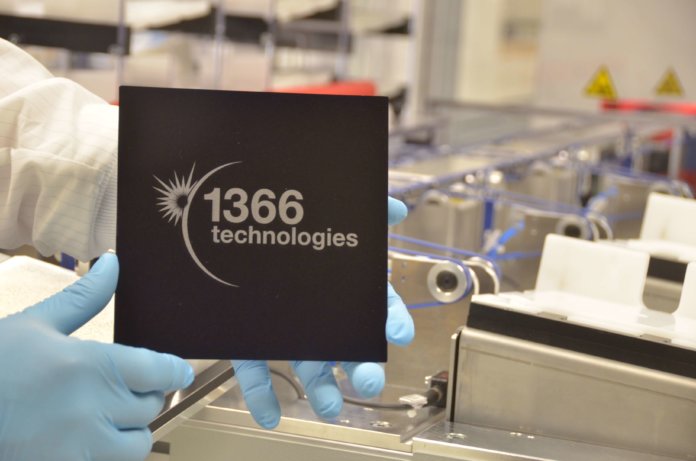 The company says it achieved this repeated efficiency record in a joint effort together with its development partner Hanwha Q CELLS. 1366’s Direct Wafer products in combination with Hanwha Q CELLS’ Q.ANTUM cell technology also achieved an average efficiency of 20.1% on the pilot line with standard processes used in mass production. The collaboration between the two companies has boosted the cell efficiency of the Direct Wafer technology by an average of 0.8% per year.

“Our strategic partnership with Hanwha Q CELLS is paving the way for a solar future where high-efficiency cells are realized at a substantially lower cost,” says Frank van Mierlo, CEO of 1366 Technologies. “Working at the melt level, rather than an ingot, means you can play with the make-up of the wafer as it is being formed. The wafer is no longer a commodity but a source for efficiency gains and differentiation. With the combined benefits of our Direct Wafer products and Hanwha’s Q.ANTUM cell technologies, we are rapidly closing in on 21 percent efficiency and demonstrating performance previously only achievable with monocrystalline wafers.”

“Together, Hanwha Q CELLS and 1366 have made meaningful progress in increasing the efficiency of solar cells based on Direct Wafers. The latest performance record again shows the potential that lies in combining 1366’s innovative Direct Wafer technology with our established Q.ANTUM cell technology,” says Daniel Jeong, global CTO and executive vice president at Hanwha Q CELLS.

“The simple fact is sawing ingots – whether cast multi or pulled mono – is wasteful and energy intensive. It’s an old process for a modern industry, claims van Mierlo. “While streamlining the supply chain has lowered costs, the ability to provide further value through innovation is severely constrained. Direct Wafer products deliver the lowest LCOE for a cost-driven industry and we do it without sacrificing performance, using just one-third the energy.”

The wafers were produced with 1366’s current production furnaces in Bedford, Mass., and the cell fabrication was completed using production process equipment at Hanwha Q CELLS’ Center for Technology, Innovation, and Quality in Thalheim, Germany.