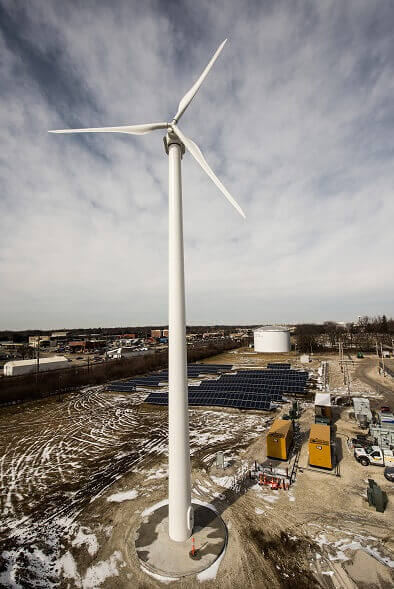 Ameren Corp., a Midwest-based energy company, and S&C Electric Co., a smart grid solutions provider, conducted a successful 24-hour islanding test this month at the recently deployed Ameren microgrid in Champaign, Ill. The microgrid – which the partners tout as one of the most technologically advanced utility-scale microgrids in North America – has been operational since May and has now proven it can provide a seamless transition from grid-connected to island mode.

The test focused specifically on the 50 kW microgrid at the site, which powers an Ameren research facility. The partners says the complete microgrid includes 225 kW of renewable generation (solar PV and wind) and 250 kW/500 kWh of battery energy storage.

The test began at 8 a.m. on Aug. 3, with the battery’s state of charge at 97% capacity. Once the battery was depleted to 90% capacity, solar and wind generation kicked in, simultaneously carrying the load and charging the battery. This pattern continued throughout the day, never letting the battery fall lower than 88% capacity. In short, the partners say microgrid functioned without any human interaction, automatically coordinating resources and ensuring power never faltered.

The entirety of the test can be seen here, indicating when the battery was being discharged and when renewable generation was utilized. Upon conclusion of the 24-hour test, the microgrid successfully moved back into grid-connected mode without any loss of power for end users.

“We have one of the few microgrids in the world that operates at utility-scale voltages and can seamlessly transition from grid-connected to islanded mode,” says Ron Pate, senior vice president of operations and technical services at utility subsidiary Ameren Illinois. “This successful test provided tangible proof that the system can accomplish what it was designed to do. The microgrid isn’t theoretical and our tests don’t need to be lab simulations. We were able to prove that this technology works and can provide key benefits to our customers.”

During the test, the Ameren microgrid functioned on 100% renewable energy throughout the day. Many microgrids of this scale need to rely on rotating machines or generators, which prevent 100% penetration of renewable energy in these situations. At the Ameren microgrid, when the generation exceeds the load, the excess powers the battery. With a rotating machine, the influx of generation would have caused the system to trip due to penetration limits.

“When designing this microgrid, we were confident that the seamless transition and the ability to run solely on renewable generation would be two of the biggest features to this system,” says David Chiesa, senior director of business development at S&C. “Microgrids are becoming more commonplace on the grid, and this test continues to prove how impactful they can be for energy users.”