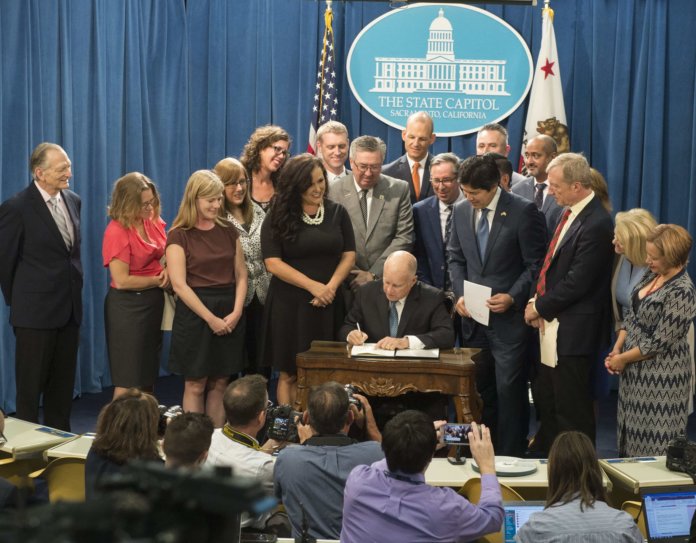 The legislation, first introduced last year by State Sen. Kevin de Leon and supported across the board by clean energy groups, advances California’s renewable portfolio standard (RPS) to 50% by 2025, 60% by 2030 and 100% by 2045. Brown has also issued an executive order directing the state to achieve carbon neutrality by 2045 and net negative greenhouse-gas emissions after that.

“This bill and the executive order put California on a path to meet the goals of [the Paris Agreement] and beyond,” the governor says. “It will not be easy. It will not be immediate. But it must be done.”

“In California, Democrats and Republicans know climate change is real, it’s affecting our lives right now, and unless we take action immediately, it may become irreversible,” says de León. “Today, with Governor Brown’s support, California sent a message to the rest of the world that we are taking the future into our own hands – refusing to be the victims of its uncertainty. Transitioning to an entirely carbon-free energy grid will create good-paying jobs, ensure our children breathe cleaner air, and mitigate the devastating impacts of climate change on our communities and economy.”

Notably, in May, the California Energy Commission approved a new policy to require nearly all new homes built in the state to incorporate solar beginning in January 2020.

With the signing of S.B.100, California and Hawaii are now the only two U.S. states with a 100% RPS. According to the Sierra Club, California is now the largest global economy to commit to 100% renewables.

In response to the news, Abigail Ross Hopper, president and CEO of the Solar Energy Industries Association (SEIA), says, “California has taken a monumental step in enacting one of the world’s most ambitious clean energy policies. As the largest solar market in the U.S., California has already proven that investing in renewable energy brings jobs and massive economic and environmental benefits to the state – benefits that will grow exponentially with the enactment of S.B.100.”

She adds that both the governor and the California legislature “deserve enormous credit for getting S.B.100 done.”

“As the world’s fifth largest economy, California and this law set a new benchmark for other states,” she continues. “But we cannot let up. To meet the state’s aggressive climate goals, we need to spur near-term procurement of large-scale solar projects. We look forward to working with California lawmakers and the California Public Utilities Commission on this pressing matter.”

Also celebrating the passage of S.B.100 is Vote Solar, whose executive director, Adam Browning, calls it “the biggest and most important climate action to date in the United States.”

“Big because California is big,” he continues. “Important because it sets a new bar for what’s possible, and because it is replicable. This year, New Jersey committed to 50 percent renewables, and in November, voters in both Arizona and Nevada will decide whether their own state should do the same. This is a revolution of evolution, and it’s happening across the country.”

Browning adds, “When the world’s fifth largest economy votes to go 100 percent clean, there’s no room left for the naysayers to say it can’t be done.”