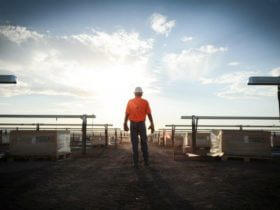 Located near Clark County, Nev., Eagle Shadow Mountain is the first of two projects that 8minute is contracted to develop. The 300 MW AC/387 MW DC solar project is slated for completion by the end of 2021.

Situated on the Moapa River Indian Reservation in the Nevada desert, the Eagle Shadow Mountain project is anticipated to generate up to 400 new jobs during the 18-month construction period, with 10 full-time employees working at the plant upon completion.

“It’s an honor to be collaborating with the Moapa Band of Paiutes on this project,” says Tom Buttgenbach, president and CEO of 8minute. “With a proven track record of on-time, on-budget delivery, 8minute is confident that Eagle Shadow Mountain be a lifelong asset to the Moapa River Indian Reservation community. We’re grateful to Capital Dynamics for their contribution to making it happen.”

Upon completion, the project is expected to generate more than 900,000 MWh of electricity per year. NV Energy has entered into a long-term power purchase agreement for the output.