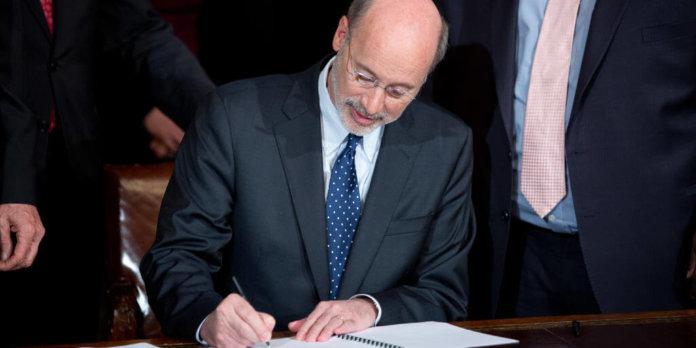 The order also establishes the GreenGov Council, designed to boost sustainable practices in state government to help achieve the goals set in the executive order.

“In the absence of leadership from the federal government, states and cities are stepping up and doing their part to reduce emissions,” says Wolf, who was just sworn in for a second term as governor. “Today, I am proud to declare the commonwealth’s intention to address climate change, the most critical environmental threat facing the world.”

The commonwealth will work to achieve a 26% reduction of greenhouse-gas emissions by 2025 and an 80% reduction by 2050 (from 2005 levels). The GreenGov Council will work with all state agencies to reduce energy use in state government and improve the energy efficiency of state buildings and vehicles – saving taxpayers money in the process.

The GreenGov Council will serve as a central coordinating body to promote the implementation of the executive order and the achievement of the following state agency performance goals:

The GreenGov Council will encourage and coordinate the incorporation of environmentally sustainable practices into the commonwealth government’s policy, planning, operations, procurement and regulatory functions. The secretaries of the Departments of General Services, Environmental Protection, and Conservation and Natural Resources will co-chair the council.

Applauding Wolf’s move is Joanne Kilgour, Pennsylvania chapter director for the Sierra Club, who has responded with the following statement:

“The science is clear – climate change is happening all around us and affecting not only communities across Pennsylvania but around the world. Governor Wolf’s commitment to serious climate action and reinstating the Green Government Council is a bold statement that signals Pennsylvania is going to do its part to curb climate change, which will cut other dangerous pollution and promote job growth across the state. Already, major cities like Pittsburgh and Philadelphia have committed to meeting the Paris climate goals, and communities in Chester and Delaware Counties are leading the way by committing to 100 percent clean energy. Sierra Club is excited to support Governor Wolf in implementing this plan to slash carbon pollution. As an organization, we will continue to work for an energy future that is equitable and powered by 100 percent clean, renewable energy.”