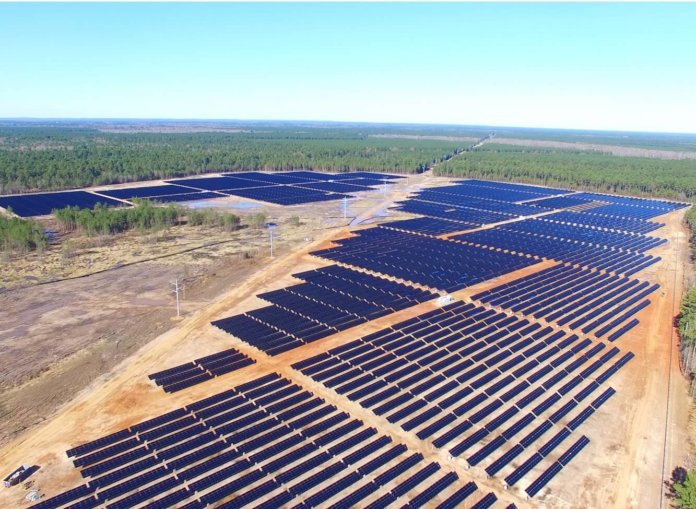 Two electric cooperatives, one defense contractor, a solar developer – and a whole lot of other people who had never talked or thought much about renewable energy – blew the lid off the solar market in Arkansas last year with a 12 MW project located near the small town of Camden.

The story behind the Aerojet Rocketdyne solar project involves a very complex, team effort. Aerojet Rocketdyne is the above-mentioned defense contractor, and all 12 MW of the project were put behind the company’s meter and sold via two innovative power purchase agreements (PPAs) developed with Silicon Ranch, the solar developer.

The impact of the Aerojet project has been, well, electric. The dignitaries attending the flip-the-switch ceremony for the project last March included both of Arkansas’ U.S. senators and the region’s U.S. representative, all of them Republicans, who had never been in Camden at the same time.

Robert A. McAdoo, who does double duty as Ouachita (pronounced Wa-shi-ta, accent on the first syllable) county judge and CEO, still gets excited when he talks about it.

“Who would have ever mentioned the words ‘solar power’ in southern Arkansas?” he said. The project was, he said, “a step of faith” that has put the region years ahead of the rest of the state.

“There’s been unbelievable acceptance of the solar project,” agreed Mark Cayce, general manager of the Ouachita Electric Cooperative, the distribution co-op in Camden and a core member of the project team. “We’ve come to find there is a pent-up demand that nobody was trying to meet because nobody had ever done it.”

In fact, the co-op now runs most of its operations off a 93 kW solar array it installed on its offices while working on the Aerojet Rocketdyne project. It also has a community solar project under construction and is offering residential installations to its members.

Another result of the Aerojet project is that it has quickly become an industry model, winning an energy innovation award – called the TECHe Award – from the Arkansas Department of Environmental Quality. It also put the Ouachita Electric Cooperative in the No. 4 spot on the Smart Electric Power Alliance (SEPA) Top 10 list for utilities adding the most new solar watts per customer in 2016.

Meanwhile, the Arkansas Electric Cooperative Corp. (AECC), the power provider for Ouachita and 16 other co-ops in the state, has one of the project’s unique PPAs, allowing it to buy excess power from the Aerojet project. Being part of the project team was a trigger for AECC’s own move into solar with the launch of a for-profit solar subsidiary, Today’s Power.

That company has built a number of community solar projects for co-ops in Arkansas, Tennessee and Oklahoma, said Duane Highley, AECC’s president and CEO.

“Within two years, the organization is profitable and has a balance sheet in the tens of millions,” he said. With Arkansas facing “the retirement of some really large coal facilities, we don’t think you can build enough solar fast enough in the state.”

The search for clean energy
How did all this happen in an economically depressed area of southern Arkansas that has been losing population for the past 20 years? Once again, it was all about the team and strategically good timing. The project came together at the point in time at which solar went from being an alternative to a mainstream energy source that can compete with fossil fuels, even in a state, like Arkansas, with extremely low power prices.

A remnant of what was once a cluster of defense contractors in the Camden area, Aerojet Rocketdyne is the region’s largest employer and the Ouachita co-op’s largest customer, accounting for about 10% of the utility’s load, Cayce said.

A Texas native who came to the Ouachita co-op 15 years ago, Cayce had seen the impact of businesses closing down and leaving the region. So when Aerojet approached him about a solar project, he said, he knew he had to find a way to make it work.

The defense contractor has been in Arkansas – at the Highland Industrial Park, which is actually located in Calhoun County, near Camden – since the late 1980s, according to Gene Hill, the park’s CEO.

“It’s where we build most of the nation’s tactical rocket motors,” said Erik Didriksen, Aerojet’s Safety, Health and Environmental Strategist.

As a result of federal policies that favor contractors using renewable energy, Aerojet had been looking for a green energy project for its Arkansas plant for the better part of a decade, recalled Corbet Lamkin, who first met Didriksen in 2006. Lamkin was then vice president for academic affairs at Southern Arkansas University Tech, a community college that is part of the larger state system. Now retired as chancellor emeritus of the school, he is also a member of the board for the Ouachita co-op.

With solar prices still high in 2006, he and Didriksen initially researched the possibilities of biomass – south Arkansas is a big timber area – and even coal with carbon capture, Lamkin said. But as prices fell – and Aerojet successfully installed solar at its plant in Sacramento, Calif. – they returned to the idea of solar and working with the Ouachita co-op.

Then things got complicated.

According to Cayce, to make the project financially viable, the solar field had to be sized to exceed Aerojet Rocketdyne’s load. But under Arkansas state law and utility regulations, the company would only be able to sell any excess power to a utility, at a cost comparable to the wholesale price of other power – what the industry calls the avoided cost.

Another potential roadblock was the project’s likely negative impact on both Oachita’s and AECC power sales.
By that time, the co-ops and Aerojet were also working with Silicon Ranch, a solar developer started by a former governor of Tennessee, Philip Bredesen, and two other former state officials, Matt Kisber and Reagan Farr. The firm has a history of working through PPA’s for challenging situations, said Matt Beasley, chief marketing officer – for example, the 8 MW project at Volkswagen’s Chattanooga assembly plant, another effort involving multiple stakeholders.

The goal was to figure out a way to ensure the project was a win for the co-ops, Aerojet and Silicon Ranch, and once again it was a team process.

“We went around, saying, ‘How would this work?’” said Duane Highley of AECC. “There were many ups and downs, but all of us decided we would find a way and kept iterating till we found a way.”

The solution they developed, said Cayce, was to put all 12 MW of the project behind Aerojet’s meter, with Silicon Ranch signing separate PPAs with both Aerojet and AECC. The Aerojet contract allowed the company to buy all the power it could use from the project, while the PPA with AECC let it buy any excess at a rate slightly above avoided cost.

On the operational side, the project had to located near a Ouachita co-op substation. Highland Industrial Park, where Aerojet’s Arkansas plant is located, had 172 acres of timber land right behind one of the co-op’s substations, and Hill said, when his company ran the numbers, “it was more beneficial for us to convert that property to a higher use.”

As to lost electricity sales, both co-ops found that reducing their load also allowed them to reduce their peak demand and demand charges, which offset the lost sales revenue, Cayce said. Last summer, Ouachita was able to shave its peak by 12 MW, taking a major chunk out of its 52 MW peak demand, he said.

A bigger vision
At a time when more and more large corporations are asking their utilities for clean power, the Aerojet Rocketdyne project has also become a model for better communication and collaboration among these key industry stakeholders.

Cayce sees fear of lost revenue and sales behind the tense relations that have emerged between a few utilities and some of their corporate customers.

“We’ve been trying to demonstrate some models that show utilities that you can work with your large industrial customers on a large solar project, and it can be beneficial to both parties,” he said.

The Aerojet project has, in fact, provided multiple benefits to the team of stakeholders that helped develop it. The solar project is now providing about 30% of the power at Aerojet’s Arkansas plant, Didriksen said. The company has also moved some of its manufacturing from California to Arkansas, which has meant more than 220 new jobs for the Camden area.

Meanwhile, Cayce and McAdoo report fielding calls from companies in the area interested in developing their own solar projects. Silicon Ranch is already working with other communities and businesses wanting to replicate the success of the Aerojet project.

Solar has also become a focus for economic development in the Camden area, something, Cayce said, that could help revive the economy and stem the loss of population in the region.

For Didriksen, the project shows that industry “leadership can come from any part of rural America, even one that happens to be economically depressed.”

“Everybody gave a little bit to make this happen because it was a different kind of project for us all,” Hill said. “Everybody had to look at this project with eyes wide open and say, ‘What’s the goal here? What’s good for southern Arkansas?’ Everybody understood there was a bigger vision.”

K Kaufmann is communications manager at the Smart Electric Power Alliance (SEPA). This article, originally published on SEPA’s website, was republished with permission from the organization.