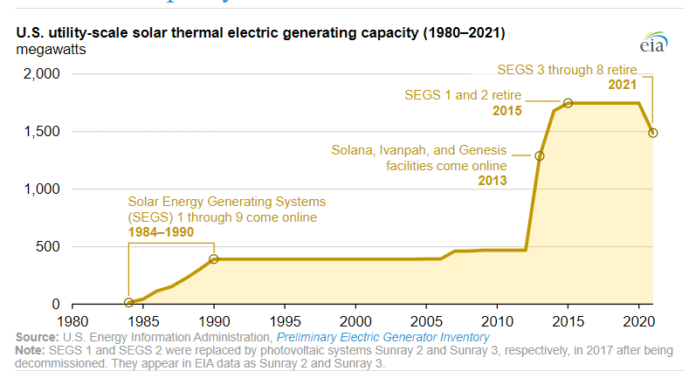 The Solar Energy Generating Systems (SEGS) facility in California’s Mojave Desert recently retired five of its solar plants (SEGS 3 through 7) and plans to retire a sixth (SEGS 8) this month, based on information submitted to U.S. Energy Information Administration (EIA) and published in its Preliminary Electric Generator Inventory.

After SEGS 8 is retired, only one solar thermal unit at SEGS will remain operating (SEGS 9).

SEGS, which began operating in 1984, is the world’s longest-operating solar thermal power facility.

Solar thermal power plants use mirrors to focus sunlight onto a receiver, which absorbs and converts the sunlight into thermal energy (heat). The heat is used to drive a turbine, which produces electricity. The SEGS units are parabolic trough concentrating solar thermal power (CSP) systems, meaning that parabolic (u-shaped) mirrors capture and concentrate sunlight to heat synthetic oil in a central tube, which then boils water to create steam. The steam drives the turbine, generating electricity. 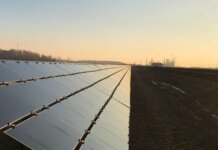 Why are they being retired?