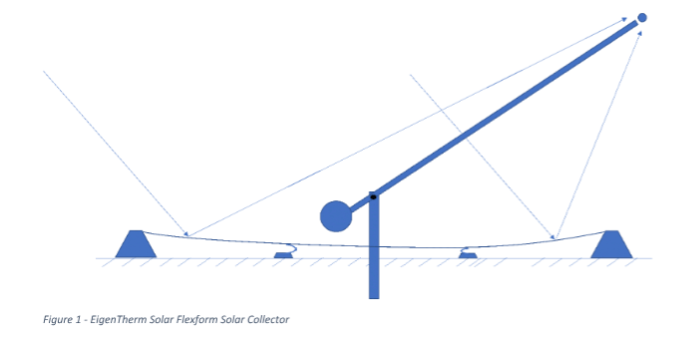 The company is the latest venture of Bill Alexander, the founder of Ideal Power, a power conversion technology company delivering cleantech solutions.

“The FlexForm Collector is the culmination of almost four decades of work and is one of my proudest engineering achievements,” says Alexander, president and founder of EigenTherm Solar. “It was designed from the start to achieve the lowest possible costs in concentrating and collecting solar thermal energy, and while it is an elegantly simple design, it is also highly effective.”

The FlexForm Collector’s reflector consists of a thin, specular, reflective membrane suspended over prepared ground. A linear receiver placed above the reflector optimally absorbs the concentrated sunlight into a heat-transfer fluid. Only the receiver moves to track the sun, while the reflector is stationary but changes shape under the influence of a partial vacuum to maintain optimum concentration – hence the name FlexForm.

When the solution is used at scale, EigenTherm Solar expects to be able to deliver electric power at costs significantly lower than fossil fuels, including combined cycle natural gas, in the U.S.

“The long-term goal of all renewables is to displace most fossil fuels worldwide,” continues Alexander. “Our vision is to do it with a combination of direct-from-the-plant power and power to sun-poor regions from liquefied hydrogen transported globally from EigenTherm Solar plants located in sun-rich regions. These goals require sub $20/MW per-hour power around the clock, which I believe the FlexForm Collector, coupled with low-cost thermal storage, will achieve.”