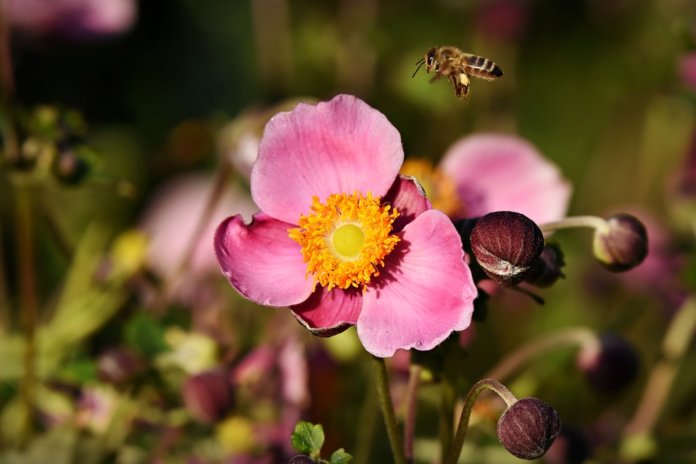 A new undertaking at Penn State’s College of Agricultural Sciences will look at how solar farms can contribute to healthy ecosystems and boost pollinator populations.

“We have been given a remarkable opportunity to show how renewable energy production can be a platform for biodiversity, especially for valued pollinator species,” Harland Patch, assistant research professor of entomology, says of the project, which will complement the university’s new solar power initiative. “What we are proposing is new to the U.S., and we believe it will be a model for others to emulate.”

He explains that Penn State, in partnership with Lightsource BP, in early September broke ground on a 70 MW, utility-scale solar project in Franklin County that will provide 25% of Penn State’s purchased electricity over the next 25 years.

More than 150,000 solar panels will be installed across three locations on about 500 acres leased from local landowners. The solar project will save the university millions in energy costs, reduce greenhouse-gas emissions, advance the Pennsylvania solar market, strengthen rural communities and provide farmers with an additional source of income, the university says.

“The facility is being constructed in a regenerative fashion, meaning that steps are being taken not only to minimize damage to the land but also to improve soil health and create wildlife habitat,” Patch says.

Yet, there are more benefits that can be harvested at the site – especially for native bee species – and that is what Patch and colleagues Christina Grozinger, distinguished professor of entomology, and Sjoerd Duiker, professor of soil management and applied soil physics, intend to explore.

“We must find creative ways to incorporate pollinators in landscape management. It’s gratifying to be part of an endeavor that can rebuild our honey bee colonies,” says Grozinger.

“Pennsylvania beekeepers lose nearly 50 percent of their honey bee colonies each winter,” adds Grozinger, who is also director of the Center for Pollinator Research at Penn State.

Penn State says that statistic is more worrisome when one considers that nearly 90% of flowering plant species need pollinators to set seed and fruit.

“We must find creative ways to incorporate pollinators in landscape management,” Grozinger adds. “It’s gratifying to be part of an endeavor that can rebuild our honey bee colonies.”

Working with Penn State’s Sustainability Institute, Penn State’s Office of Physical Plant and Lightsource BP, the scientists plan to establish considerable pollinator plantings at each of the locations. They are seeking Penn State faculty, students and extension educators in disciplines such as engineering, economics, sociology, energy and wildlife to join them.

“A venture of this magnitude will require support from a number of people from various backgrounds to get it up and running,” Patch says. “As for long-term sustainability, we propose having ‘living laboratories’ at the sites that would be used for education and research focused on pollinators and sustainable landscape management.”

Now in the design phase, plans include what the scientists describe as “showy” pollinator-friendly meadows, featuring hedgerows around the perimeters of the properties and sections designated for beekeepers to raise honey crops. One of the sites will be designated for animal grazing, with mixed flowers and low-growing vegetation planted underneath the solar arrays.

“It is flower farming for honey bees,” notes Patch, who designed the Pennsylvania Solar Site Pollinator Habitat Planning Scorecard, a guide to vegetation management at solar installations to make them more supportive for native pollinators.

Calvin Ernst, a Penn State graduate and president of Ernst Conservation Seeds in Meadville, a company that specializes in native and naturalized seeds, will work with the scientists to select grasses, shrubs and plants that will promote biodiversity and pollination.

Duiker’s experience working with farmers on soil management, plant diversity and grazing methods through Penn State Extension will be beneficial in assisting a local farmer who wants to graze sheep at one of the sites.

The university says a challenge will be to figure out which grasses and flowering plants will grow successfully underneath the solar panels to provide grazing, soil health improvement and pollinator habitat.

“There are solar farms that choose to place gravel underneath the solar panels,” Duiker says. “Here, we are taking that land and making it productive. In turn, the soil will be healthier, and water and air quality will be better – and that is essential for all living beings, including pollinators.”

Patch is optimistic that the team will be ready to move dirt when planting season arrives in the spring. In the meantime, the researchers are investigating funding sources, including private and government grants.

“Penn State, as an institution, is leading the way in advancing a sustainable future for all of us,” Patch says. “Our work supports that vision and is one of the reasons why it is so exciting.”