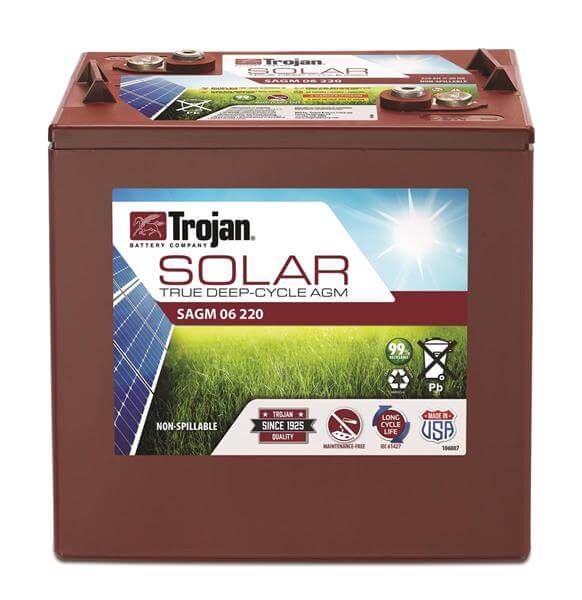 Trojan Battery Co. LLC has launched its new line of true deep-cycle absorbent glass mat (AGM) batteries specifically designed for solar and other renewable energy applications. The company, which has operations in California and Georgia, notes the new Trojan Solar AGM line is manufactured in the U.S.

Offering a three-year warranty for stationary applications and tested to an eight-year design life under IEC 61427 standard for solar batteries, this initial release includes a wide range of Trojan Solar AGM models. The company says that with its non-spillable design, the new Trojan Solar AGM batteries enable installers to customize the use and position of the batteries in customer applications and are certified for non-hazardous shipping per U.S. DOT/IATA regulations.

“As we continue to see strong customer interest and demand in applications such as residential storage (both off-grid and grid-tied), solar home systems, microgrids, remote telecom, as well as oil/gas, Trojan’s new line of true deep-cycle Solar AGM batteries has been designed from the ground up and optimized for these types of solar applications and the need for frequent cycling in harsh environments,” says Ganesh Balasubramanian, director of new market development for Trojan Battery.

The new Trojan Solar AGM battery line joins the company’s current family of Smart Carbon deep-cycle flooded batteries, which feature Trojan’s proprietary carbon additive designed to helps reduce the effects of partial state of charge (PSOC) or undercharging. Operating at PSOC on a regular basis can quickly diminish the overall life of a battery, which results in frequent and costly battery replacements, the company says.

“With batteries being one of the most expensive components of a battery-based solar system, it is critical to maximize the life of the battery bank to reduce the total cost of ownership of a system,” comments Michael Grundke, general manager of EMEA for Trojan Battery.