South Carolina’s 2019 Energy Freedom Act breathed a new hope for distributed solar in a state that recently maxed-out its net metering cap. And the stars appeared to be the limit for utility-scale, now emboldened by a legislative preference for more capacity.

In this saga, however, the state’s utility commission strikes back. In rulings that followed passage of the law, the South Carolina Public Service Commission (PSC) gutted the rates Duke Energy and Dominion Energy must pay for power from solar plants. The decision would have quashed a rising solar rebellion in the state, but the return of the solar trade was even stronger.

In response to a well-organized strike from developers, lawmakers and nonprofit groups, the PSC reversed itself in both utilities’ dockets – within a month following its decisions – offering rates and other terms that permit large-scale solar to survive in South Carolina.

The Energy Freedom Act mandated that the PSC open dockets to establish the price the state’s investor-owned utilities must pay for renewable energy under the Public Utility Regulatory Policies Act (PURPA). The PSC’s rulings are best understood with a refresh of PURPA’s implementation in the state’s regulatory scheme.

South Carolina utilities enjoy a regulated monopoly. In this environment, utility-scale solar relies almost exclusively on PURPA’s “must-take” provision. Utilities must purchase power from qualifying solar plants and must pay a rate equal to the utility’s cost in generating the same power (or purchasing it the market). PURPA refers to this rate as “avoided cost” because it reflects expenses the utility avoids when purchasing power from a solar plant it did not build and does not maintain.

To capture these avoided costs, the rate sums the utility’s capital expenditures in plants and other facilities (called capacity costs) with fuel prices and some operating and maintenance expenses (called energy costs). In this way, PURPA ensures the public is indifferent because consumers pay the same for electricity whether the utility generates it with traditional fuel or buys it from a solar developer. PURPA does not, however, acknowledge the false equivalency of comparing the costs of clean power to the costs of power from carbon-emitting sources.

The act removed the PSC’s determination of avoided costs from the utilities’ annual fuel proceeding and placed it in an independent docket, to occur immediately, and every two years thereafter.

The dockets required the PSC to address the threshold question of whether solar – a highly variable, diurnal source of power – offers any capacity value to South Carolina utilities. In other words, does large-scale solar eliminate Dominion’s and Duke’s need to build new power plants?

Dominion argued large-scale solar does not offset its capital expenditures and therefore has no capacity value, because South Carolina’s peak demand occurs during winter mornings, when the sun is down and solar cannot help shave the utility’s load.

Dominion further argued that the ratepayer would not be indifferent under PURPA unless the avoided cost rate was reduced by a “solar integration charge” accounting for the expenses Dominion incurs while leveling-out the variable output from solar generation.

To this point, Dominion testified it needed an additional 35% in operating capacity to cover variable generation from solar plants.

The PSC disagreed that winter peaking was the exclusive arbiter of capacity value in South Carolina and held that large-scale solar does help Dominion meet its demand load – to the tune of 4% of the nameplate capacity of a solar plant. The PSC’s December 2019 order questioned Dominion’s methodology for determining capacity reserves; set an interim solar integration charge of $2.29/MWh (representing the cost of an additional 18% in capacity); and required that Dominion participate in an integration study to prove its calculations.

Duke took a softer approach and acknowledged a capacity value from utility-scale solar in the state, but requested that the PSC calculate it consistent with the utilities’ integrated resource planning, outlining that Duke Energy Progress (DEP) and Duke Energy Carolinas (DEC) have no need for additional capacity until 2020 and 2026, respectively. The PSC agreed in its December 2019 order, assigning a 10-year capacity value as follows:

As to additional leveling capacity, Duke entered into a settlement agreement with the intervenors for an integration charge of $1.10/MWh for DEC and $2.39/MWh for DEP.  These amounts reflect the need for an additional 3% in operating capacity on 840 MW of new solar in DEC territory and an additional 5% on nearly 3 GW of new solar in DEP territory. The settlement agreement also permitted Duke to decrease or waive the integration charge if a developer could demonstrate the ability to mitigate solar variability through technology like battery storage.

If the PSC split some difference on capacity, it was not so generous on its calculation of avoided energy costs, including fuel costs and some operations and maintenance expenses of a utility.

In its December 2019 order, the PSC approved Dominion’s proposed “differential revenue requirement” methodology, which nets the difference in revenue for two system-wide scenarios: one with and one without utility-scale solar.

Over objection this method lacked the requisite transparency required by the act, the PSC accepted some of the lowest energy rates for solar generation in the country. For projects between 100 kW and 2 MW – a “standard offer” under the act – avoided energy rates for 1-year PPAs were set at 2.11 cents/kWh until 2024 and 2.37 cents/kWh thereafter, through 2029.

Duke, on the other hand, offered the more traditional “peaker methodology,” which calculates the projected fuel and fixed costs of the utility operating a combustion turbine over a period of time (in this case, 20 years).

“Large-scale solar projects would have been unfinanceable in Dominion territory had the intervenors not opposed the low rates set by the PSC,” explained Hamilton Davis, director of regulatory affairs for Southern Current, a South Carolina-based utility-scale solar builder and witness for the intervening parties in the Duke and Dominion dockets.

As evidenced by a chorus of concerns voiced by legislators in the aftermath of the PSC’s rulings, Davis pointed out that “the Energy Freedom Act was intended to expand the deployment of solar in South Carolina.”

“The PSC’s rulings in the avoided costs dockets would have taken us in the opposite direction, but we were able to make a compelling case that the initial decision should be revised,” he said.

In new filings with the PSC, the intervening parties noted that the avoided cost rates set for Dominion were almost 30% lower than the rates approved by the PSC for Duke and argued that such low rates precluded “any” new utility-scale solar in Dominion territory.

The intervenors also took aim at the PSC’s limitation of PPAs to 10-year terms and pointed out that competitive procurement programs for solar in North Carolina and Georgia are resulting in 20- and 30-year contracts for $36 to $38/MWh.

“We have a clear indication of what the market can deliver and what is working for our neighboring states. South Carolina would have been an outlier on rates and contract length had the solar industry not challenged the PSC’s original ruling,” Davis said.

The intervenors were largely successful. Less than 30 days after the December 2019 orders, and in response to a massive public relations campaign criticizing the rulings (including a piece calling the decisions a “doomsday scenario”), the PSC partly granted the intervenors’ motions to reconsider and for rehearing.

In a revised order entered in the Dominion proceeding during January 2020, the PSC: (1) lowered the solar integration charge to 96 cents/MWh – more than a quarter of what Dominion originally sought; (2) required Dominion to file mitigation protocols, consistent with the Duke settlement agreement permitting waiver of the integration charge through storage; (3) increased the avoided capacity value to nearly 12% of the nameplate capacity of a solar plant; and (4) raised avoided energy cost rates for standard offers as follows:

Importantly, the PSC also granted rehearing on the issue of PPA term lengths in both the Dominion and Duke proceedings. This sends a signal that the PSC may approve the longer-term lengths that are so critical for solar financing, as permitted by the act, and consistent with those present in neighboring states’ competitive procurement programs.

“With this revised ruling, we are optimistic that additional solar investment in South Carolina will continue to grow the state’s bourgeoning clean energy economy,” explained Davis.

R. Taylor Speer is a shareholder with Turner Padget in the firm’s Greenville, S.C., office, where he focuses his practice on business and employment litigation and immigration. He has extensive trial experience in matters common to the formation, growth and dissolution of small to medium-sized businesses. He is also active in building a clean-energy economy in South Carolina and has planned public development and procurement of community and municipal solar installations in the state. He may be reached by email at tspeer@turnerpadget.com. 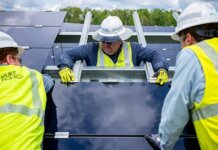