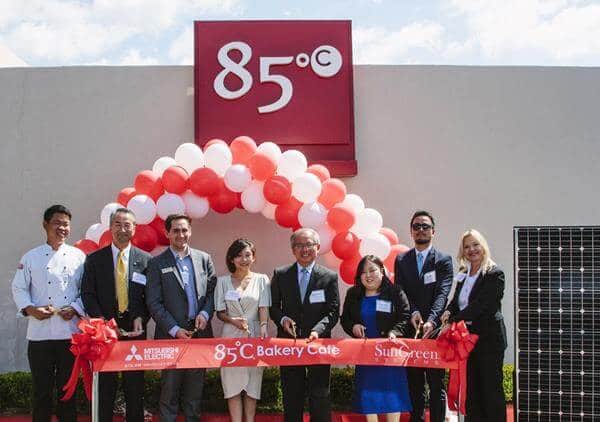 “85°C Bakery Cafe is pleased to announce our first solar-powered facility worldwide. The environment and sustainability has always been a priority for our company,” said Cheng, who is also a master chef at 85°C Bakery Cafe. Founded in 2004, 85°C Bakery Cafe has seen rapid growth and is planning to open it’s 1,000th location globally this year.

“Mitsubishi Electric is honored to be selected to supply PV modules for 85°C Bakery Cafe’s first solar installation,” said Hora. “We appreciate the bakery’s commitment to going green and its environmental leadership in the community.”

The system was installed by Irwindale, Calif.-based installer SunGreen Systems, whose CEO, John Hoffman, worked closely with 85°C Bakery Cafe to meet the bakery’s energy needs. According to Hoffman, “In addition to greatly reducing carbon emissions, this system will pay for itself within five years. After its payback, 85°C Bakery Cafe will enjoy free energy for the next 25 to 30 years.”