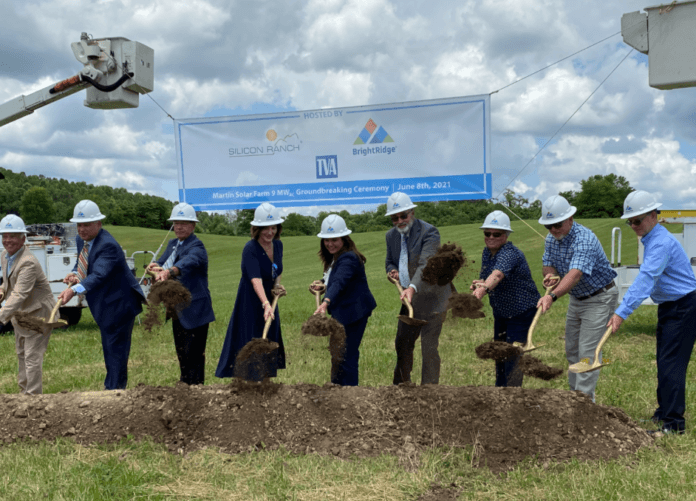 BrightRidge, Silicon Ranch Corp. and the Tennessee Valley Authority (TVA) have broken ground on a new solar farm that is now under construction in western Washington County, Tenn.

The 9 MW AC facility will be named the Martin Solar Farm in honor of the late Ralph Martin, who served for many years as director of the local power company.

As the partners announced last September, the project is the first to enter the construction phase under TVA’s new Generation Flexibility Program that is designed to encourage local power companies (LPCs) to develop new distributed generation facilities. The Martin Solar Farm will allow BrightRidge to generate clean energy to lower costs and support community and economic development. The energy produced by the solar farm will be offered first to area K-12 and higher education systems interested in offsetting some of their electricity needs with cleaner energy sources.

“BrightRidge is honored to continue to lead the region in distributed solar generation, thanks to partnership agreements with TVA and Silicon Ranch,” says Jeff Dykes, CEO of BrightRidge. “These partnerships provide our customers with an efficient way to access clean energy benefits at scale while avoiding the long-term costs of individually owned and operated facilities. At the same time, we know access to clean energy is a key long-term driver of economic opportunity in our region.”

Silicon Ranch expects to invest several million dollars in private capital to build the Martin Solar Farm and will own and operate the array for the long-term, the same approach the company takes with every project it develops. The project will be the second solar generation facility on the BrightRidge system built in partnership with Silicon Ranch and TVA. In 2019 the partners commissioned the Telford Solar Farm under the former TVA Distributed Solar Solutions program.

Silicon Ranch expects to hire approximately 150 craft workers to install a single-axis tracking system that will enable 25,000 solar panels that use advanced bi-facial technology to follow the sun across its daily arc. As it does with all projects, Silicon Ranch will focus on hiring workers from the local community and surrounding region. Once construction is complete late this year, Silicon Ranch says it will contribute significant tax revenues that are accretive to the local tax base and help support the local school district.