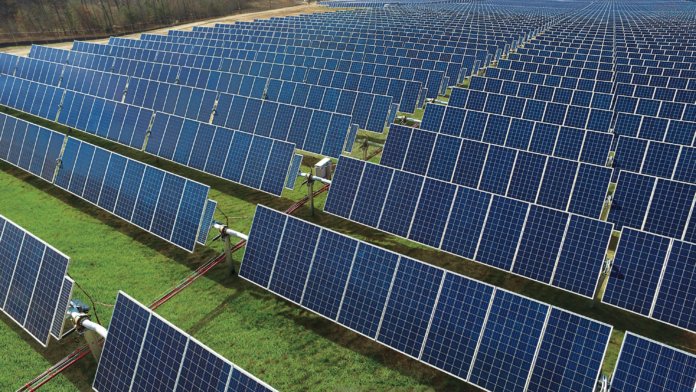 Under its 2017 Integrated Resource Plan (IRP), Dominion Virginia Power has proposed adding at least 5.2 GW of solar power over the next 25 years. According to the utility, that means solar energy could eventually serve more than 1.3 million homes throughout its Virginia and North Carolina footprint. Much to the chagrin of some environmental groups, however, the IRP also includes an increased reliance on natural gas.

The company filed its annual IRP simultaneously with the Virginia State Corporation Commission and the North Carolina Utilities Commission. Required by state law, the IRP is a long-term planning document that examines options to meet the electricity needs of customers over a 15-year planning period and considers a longer, 25-year study period.

In the shorter-term, 15-year study period, Dominion proposes adding at least 3.2 GW of new solar capacity by 2032 – enough to power more than 800,000 homes at maximum output. The company says the IRP builds on Dominion’s earlier solar commitment to develop and complete 400 MW of utility-scale solar generation in Virginia by 2020.

“For the first time, the subsidized costs of utility-scale universal solar power are expected to be low enough to make it a component of future generation additions at reasonable cost to our customers,” explains Paul Koonce, CEO of Dominion Generation Group.

However, Dominion notes increased adoption of solar energy will require extensive upgrades to the energy grid, so the company’s long-range forecast discusses the need to update and add infrastructure.

“Widespread solar use – both utility-scale universal solar and private systems – will require a modern energy grid, upgraded from the one-directional grid system that has worked so well to deliver power to generations of customers,” says Robert M. Blue, president and CEO of Dominion Virginia Power. “When the variable nature of solar becomes a major factor on the grid, it must become a flexible, two-way network, so we can deliver energy seamlessly to everyone.”

“This plan also highlights the vital roles of natural gas and nuclear generation,” says Koonce. “Gas-fired generation is clean, dependable and provides balance to the variable energy flows from solar and wind. Nuclear, with its 24/7 operations and no-carbon emissions, provides a solid base for a low-carbon future.”

He adds, “We believe this balance of solar, natural gas and nuclear hits the sweet spot in terms of cost, environmental performance and reliability for our customers.”

Along with the company’s North Anna and Surry nuclear facilities, over one-third of Dominion’s Virginia service territory could be powered with carbon-free electricity by 2032, according to the company. Most of the rest of the demand would be served by low-emitting natural gas, says Dominion.

Dominion notes that in light of current uncertainty around the future of federal and state regulatory policies, the IRP study models different regulatory scenarios and offers eight potential alternatives – all of which could still include at least 5.2 GW of new solar capacity by 2042. The company also singles out the uncertain fate of the Clean Power Plan, an Obama-era climate change initiative that a coalition of states and the Trump administration are currently working to rescind.

“Dominion will continue moving toward cleaner power sources with lower emissions, whether the Clean Power Plan lives or dies,” states Koonce. “Our customers want more renewable energy, and changing economics make the transition to renewable resources easier, with the ‘installed cost’ of solar having dropped 50 percent over the past four years.

“This makes variable solar an economically viable source of power when complemented by cleaner-burning natural gas and nuclear power, which maintain production of reliable electricity when the sun is not shining,” he adds. “This is why natural gas infrastructure – including the Atlantic Coast Pipeline – is such an important part of a comprehensive energy strategy.”

Despite Dominion’s plans to significantly boost its fledgling solar portfolio, some environmental groups argue the IRP doesn’t go far enough. In an Associated Press report, for example, the Sierra Club Virginia Chapter says the solar portion of the IRP “pales in comparison to Dominion’s massive investments in natural gas since the beginning of this decade and its plans for even more gas generation in the future.”

Nonetheless, Dominion’s new solar plans underscore a growing trend among U.S. utilities, which are increasingly taking advantage of lower-cost solar and working to add projects to their energy mix. For instance, Florida Power & Light has boosted its solar ambitions a number of times recently and currently plans on building nearly 2.1 GW of new utility-scale solar through 2023 – enough to power more than 420,000 homes.