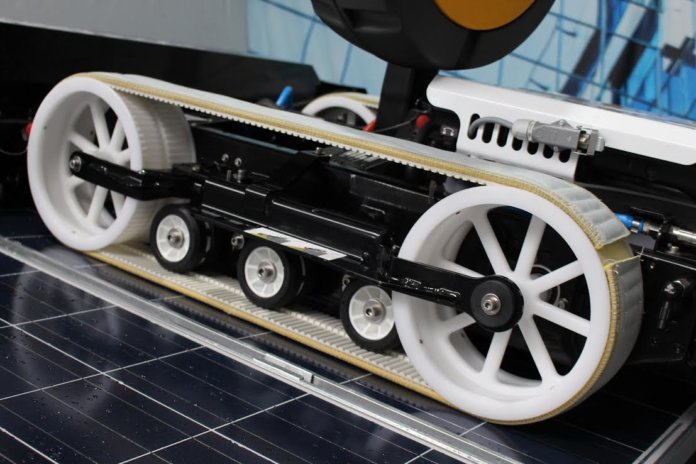 The hyCLEANER black SOLAR, designed by TG hyLIFT, cleans with low water consumption and uses lithium-ion batteries that can last for more than three hours. According to the company, the product enables users to clean five times faster than they would manually.

“Manual work by personnel is a common solution, but it can be dangerous and physically demanding,’’ explains Andreas Grochowiak, managing director of TG hyLIFT.

The hyCLEANER, which looks like a remote-controlled car, moves on four wheels and toothed belts. The belts are covered with special straps that grip the wet surface, and they can move at angles up to 35 degrees. The wheels, made of a polyoxymethylene material, are guided by a stainless-steel shaft. The bushings – manufactured by igus, a German company that specializes in motion plastics – are designed for outdoor use and help prevent wear between the two materials. Users need a water connection to start the machine, and a reel manages the hose over several meters. The brush rotates at 400 revolutions per minute.

The hyCLEANER has been used at projects such as the Stade de Suisse in Bern, where it regularly cleans 12,000 square meters – nearly 7.5 miles – of solar. The product has also been used in modern architecture, such as at the Amhem Central train station in the Netherlands and the Marineda City shopping center in Spain. The product is also available in the U.S. from Eurolifts LLC in Brooklyn, N.Y. 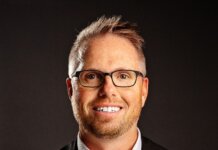 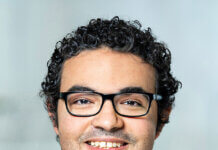 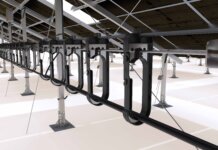