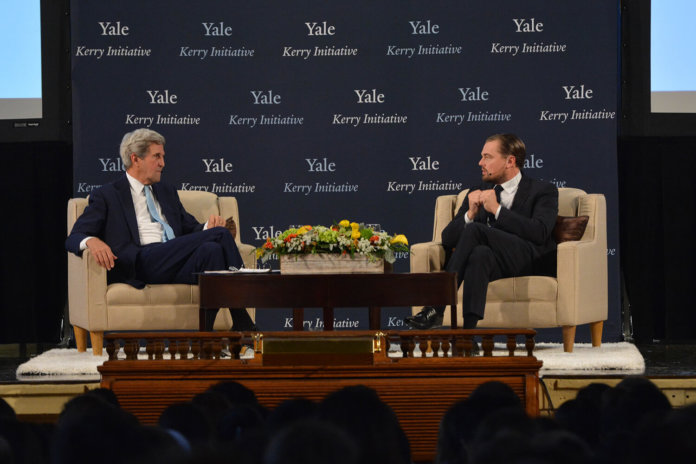 At the Tuesday event, hosted by former Secretary of State John Kerry’s Kerry Initiative, DiCaprio announced that the Leonardo DiCaprio Foundation (LDF) awarded $20 million in new grants to more than 100 organizations. According to an LDF press release, the grants have been awarded to help wildlife and habitat conservation, to aid in the defense of indigenous rights, and to support innovative grass-roots efforts aimed at combating climate change and solving complex environmental issues.

During his address at the conference, DiCaprio – LDF founder and chairman and a U.N. Messenger of Peace for Climate Change – said, “We are proud to support the work of over 100 organizations at home and abroad. These grantees are active on the ground, protecting our oceans, forests and endangered species for future generations – and tackling the urgent, existential challenges of climate change.”

DiCaprio went on to push for urgent action to drive a large-scale, global shift from a reliance on fossil fuels to a world powered by renewable energy, saying, “There exist today many proven technologies in renewable energy, clean transportation, and sustainable agriculture, that we can begin to build a brighter future for all of us.”

As part of its major new round of grants, LDF will provide a $120,000 award to the solar nonprofit RE-volv in an effort to expand access to affordable solar energy for nonprofit organizations around the U.S. In a separate press release, RE-volv says the partnership will provide match funding for RE-volv’s unique crowdfunding platform, allowing donors the opportunity to double their contributions with the support of DiCaprio’s foundation.

This is the largest grant to date for RE-volv, a two-time awardee of the U.S. Department of Energy’s SunShot Initiative. RE-volv supports solar energy projects for nonprofits that lack access to financing options. According to the group, an estimated 1.5 million nonprofits in the U.S. face financial barriers to obtaining solar power, as they do not qualify for solar tax credits or are too small to attract traditional investors. RE-volv works to help bridge this funding gap for organizations that provide valuable public services to vulnerable communities, including homeless shelters, schools, community centers, and houses of worship.

“RE-volv is working to make sure that the benefits of solar can reach everyone, including nonprofit organizations and the people they serve,” says Andreas Karelas, executive director of RE-volv. “Thanks to this generous grant from the Leonardo DiCaprio Foundation, RE-volv will be able to scale its impact and bring solar to even more nonprofits around the country.”

As the group explains, RE-volv’s crowdfunding platform employs a revolving fund. Donors select a specific nonprofit to support, and as the project pays back dividends through a solar lease agreement, the user can then reinvest in new solar projects through the RE-volv platform. RE-volv says this pay-it-forward model helps to accelerate solar energy deployment in local communities while keeping donors engaged in solar projects.

“The Leonardo DiCaprio Foundation is excited to support RE-volv,” says Gregory Lopez, LDF’s Climate Program Director. “Not only is their work important in deploying solar energy and reducing greenhouse gasses, [but also] their unique model provides an introduction of accessible, renewable energy to new communities.”

To date, RE-volv says it has raised over $300,000 from over 1,000 people in 22 countries. It has crowdfunded 10 solar projects (150 kW of capacity) in four states, include Harbor House in Oakland, which serves refugee, immigrant, and low-income families with after-school programs and ESL classes; and Morris Chapel Baptist Church, the oldest African American Church in Philadelphia. Thanks to the solar projects, grantees are expected to save between 15% and 40% on their electric bills. In total, these 10 nonprofits will save more than $1.5 million over the life of their solar energy systems. RE-volv says its solar revolving fund, the Solar Seed Fund, is now worth $650,000 in future lease payments from these 10 projects – payments which will be used to finance at least 20 more solar energy projects.

In addition to financing projects, RE-volv trains college students and community volunteers to become Solar Ambassadors, who in turn lead the on-the-ground efforts to deploy solar. RE-volv claims it has also educated 10,000 people about solar energy through training, outreach, and more than 100 events.

Among many other LDF-highlighted grantees are the Solutions Project, whose Fighter Fund and Leadership Fund provide direct grants to community organizations across the U.S. that are fighting for 100% renewable energy, and SunFunder, whose Beyond the Grid Solar Fund vehicle provides affordable access to solar in developing countries in Africa and South Asia. More information on LDF’s $20 million round of new grants is available here.

Photo courtesy of Michael Marsland: Following his address at the Yale University conference, DiCaprio and Kerry talked about how members of the audience could support action on climate change.