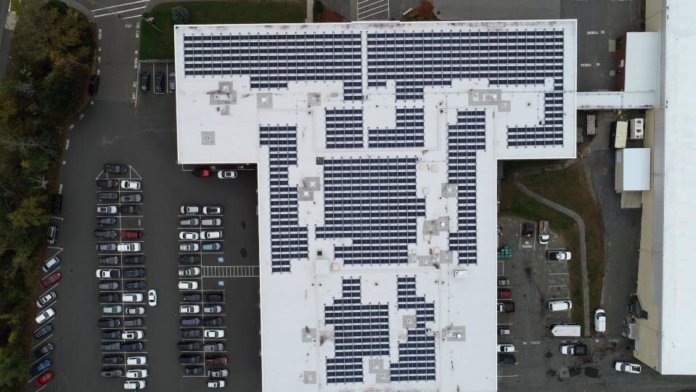 Solect Energy has completed the installation of a 300 kW DC solar project on the roof of Daniel L. Joyce Middle School, located in Woburn, Mass.

The 798-panel system will reduce the school’s price per kilowatt-hour for electricity by 64%, saving approximately $29,000 in the first year. Over the life of the contract, electric bill savings are projected to be at least $500,000, based on current Eversource electricity rates. If the utility’s rates rise, the savings to the school increase.

Further, the renewable energy system will avoid the emission of 580,000 pounds of carbon dioxide into the air per year. Over 20 years, the avoided CO2 emissions equate to that of driving a car 13.45 million miles.

The solar system is the first of three the city is installing on local schools with Solect Energy through PowerOptions, a nonprofit energy-buying consortium serving Massachusetts, Connecticut and Rhode Island. Solar panels will also be installed on the Hurld-Wyman Elementary School and Goodyear Elementary School.

“The hugely successful 3.4 MW solar farm built on the former landfill has generated over $1.3 in net metering revenue for the city over the last two years,” Galvin says. “In addition, our 260 kW solar system on the Kennedy Middle School roof has generated over $30,000 per year in energy savings for the school department.”

“The City of Woburn shows great leadership in recognizing that solar is an easy way to save money that can then be redirected to more important uses,” notes Ken Driscoll, CEO of Solect Energy.

Together, Solect Energy and PowerOptions have reduced energy costs for more than 60 government agencies, cities, towns, schools and nonprofits across Massachusetts.

“Our mission is to help communities save time and money on energy so more resources can be directed toward serving the public,” says Cynthia A. Arcata, CEO of PowerOptions.