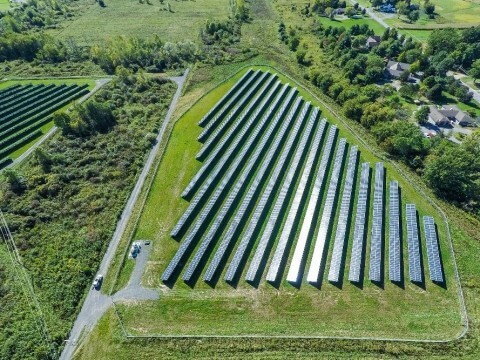 “We are excited about this new venture that is good for our environment, good for our bottom line, and through this partnership, it will benefit our students as well,” says Dr. Randy VanWagoner, college president of MVCC.

According to groSolar, the MVCC solar project is another successful application of a net-metered project supported by a grant from the New York State Energy Research and Development Authority (NYSERDA). Electricity generated by the project will directly offset MVCC’s electricity costs.

“groSolar is proud to support MVCC’s environmental leadership with this solar energy project. Educational facilities across the country are turning to renewable energy technology, and we’re glad to see another successful application with MVCC,” says Timothy Heinle, groSolar vice president.

The project was made possible thanks to collaboration among groSolar, MVCC and the Rome Industries Development Corp. (RIDC), as well as funding through Gov. Andrew Cuomo’s NY-SUN initiative.

“Congratulations to Mohawk Valley Community College for supporting renewable energy projects that improve the environment for the benefit of everyone in the community,” says Alicia Barton, president and CEO of NYSERDA. “Projects like this demonstrate that solar is a clean, affordable energy choice for communities across New York who are advancing Governor Cuomo’s Reforming the Energy Vision strategy.”