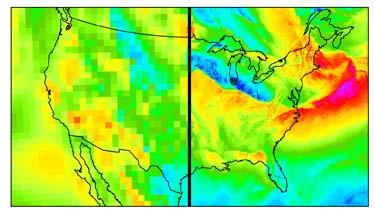 Researchers at the U.S. Department of Energy’s (DOE’s) National Renewable Energy Laboratory (NREL) have developed a novel machine learning approach to quickly enhance the resolution of wind velocity data by 50 times and solar irradiance data by 25 times – an enhancement that has never been achieved before with climate data.

The researchers took an alternative approach by using adversarial training, in which the model produces physically realistic details by observing entire fields at a time, providing high-resolution climate data at a much faster rate. This approach will enable scientists to complete renewable energy studies in future climate scenarios faster and with more accuracy.

“To be able to enhance the spatial and temporal resolution of climate forecasts hugely impacts not only energy planning but agriculture, transportation and so much more,” says Ryan King, a senior computational scientist at NREL who specializes in physics-informed deep learning.

King and NREL colleagues Karen Stengel, Andrew Glaws and Dylan Hettinger authored a new article detailing their approach, titled Adversarial super-resolution of climatological wind and solar data, which appears in the journal Proceedings of the National Academy of Sciences of the United States of America.

However, it is very difficult to preserve temporal and spatial quality in climate forecasts, according to King. The lack of high-resolution data for different scenarios has been a major challenge in energy resilience planning. Various machine learning techniques have emerged to enhance the coarse data through super-resolution – the classic imaging process of sharpening a fuzzy image by adding pixels. But until now, no one had used adversarial training to super-resolve climate data.

Adversarial training is a way of improving the performance of neural networks by having them compete with one another to generate new, more realistic data. The NREL researchers trained two types of neural networks in the model – one to recognize the physical characteristics of high-resolution solar irradiance and wind velocity data and another to insert those characteristics into the coarse data. Over time, the networks produce more realistic data and improve at distinguishing between real and fake inputs. The NREL researchers were able to add 2,500 pixels for every original pixel.

This approach can be applied to a wide range of climate scenarios from regional to global scales, changing the paradigm for climate model forecasting. 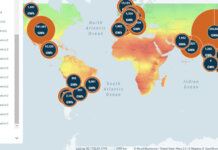 What is the total processing time from data in to forecast out? Can this be used for real time market operations? What metrics are being used to quantify the accuracy improvement? MAE, MAPE, MSE? Does it improve atmospheric aerosol impacts?