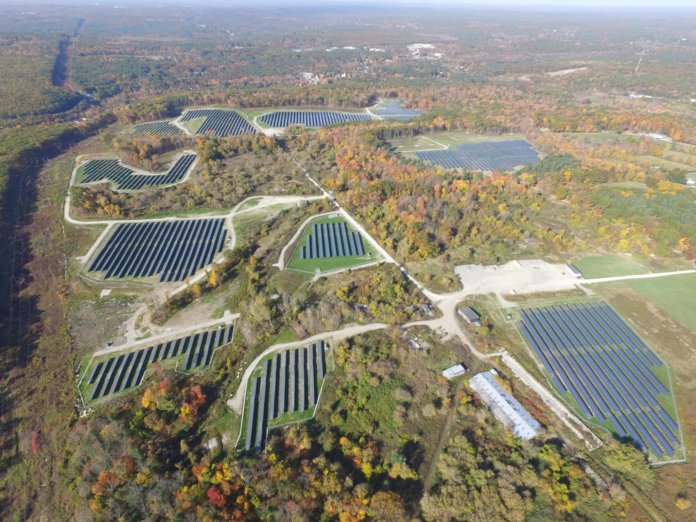 Boston-based BlueWave Capital LLC has cut the ribbon on its 16.5 MW Barrett Street community solar project, which is made up of nine solar PV arrays in Oxford, Mass.

According to the company, subscribed residents and small businesses will receive clean power from the project in the form of net-metering credits as part of BlueWave’s Community Solar Share program. In addition, Fay School of Southborough, Mass., and Phillips Academy Andover of Andover, Mass., are the “anchor” off-takers for the project, having contracted for 1.625 MW and 6.5 MW of the net-metering credits, respectively. As a result, both schools are furthering their sustainability goals while reducing their electricity costs.

“Fay School is delighted to be part of this green energy initiative,” says Rob Gustavson, head of school at Fay School. “Our partnership with BlueWave has helped us broaden our ongoing commitment to environmental sustainability.”

Located on what was once a large commercial piggery, the Barrett Street project will also protect 100 acres of farmland from more intensive use and enable future agricultural use, generate local tax revenue for the Town of Oxford, and create and support Massachusetts’ clean energy and climate goals, according to BlueWave.

“The Town of Oxford is honored to be part of the sustainable energy future, and we welcome BlueWave to our community,” says Oxford Selectwoman Cheryll A. LeBlanc.

The Barrett Street project has been under development with landowners Martin Realty Co. and Brett and Dorothy Mann since 2013. In March 2016, site preparations began, and mechanical completion of the assemblage was achieved in July 2016. Conti Solar served as the engineering, procurement and construction contractor.

“We are thrilled to have been involved in the construction of a project that so ably demonstrates the many positive impacts a solar installation can have,” says Matthew Skidmore, vice president of Conti Solar. “Not only is the system offsetting a significant portion of the local residents and small businesses electricity, but the construction process provided jobs for more than one hundred local laborers, operators and electricians.”

“National Grid has a long history of supporting clean energy, and we are pleased to have collaboratively worked with BlueWave to connect this milestone project ahead of schedule. This is the largest community solar project installed to date in our service area,” states Kevin G. Kelly, director of customer energy integration at National Grid. “Projects like these don’t happen without teamwork among all stakeholders. We congratulate BlueWave in delivering another important renewable energy project.

“BlueWave’s mission to provide ‘solar for the 100 percent’ is being further realized through the Barrett Street project,” says Trevor Hardy, CEO of BlueWave. “Whether through our development and ownership of community solar projects or through our Community Solar Share product or Solar Home Loan, we are providing access to clean, locally generated electricity at a savings to residents and small businesses across the commonwealth of Massachusetts and in other states.

“To date, we have delivered more than $4.5 million in annual savings for customers and more than $125 million in savings over the life of contracts while reducing CO2 by 44,000 metric tons annually – the equivalent of taking 10,000 cars off the road.”